"You won't take my pal! You'll have to take my spark first!"

―Zorillor in Sphere of Influence.

Zorillor is a Skunkticon thief whose robot mode is the same as Malodor and the other Skunkticons.

At some point, Zorillor got hold of the Sphere of Doradus. Imprisoned aboard the Alchemor, Zorillor was freed when the ship crashed on Earth, but as a loner did not join up with any of the Decepticon groups that subsequently formed. Bee Team eventually found him and chased him back to his cave hideout. While the many traps he'd set kept the Autobots busy, Zorillor packed his stolen loot to make a hasty departure with the sphere, however he ran into Drift and Strongarm. He hit the pair with his spray, only for Drift to slice the end off his gun, and when he attempted to flee, Drift's Mini-Cons, Jetstorm and Slipstream successfully captured him. 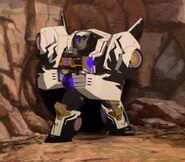 Add a photo to this gallery
Retrieved from "https://transformers.fandom.com/wiki/Zorillor?oldid=456185"
Community content is available under CC-BY-SA unless otherwise noted.