This article is about the Trainbot from Transformers: The Headmasters. For the starship from Beast Wars II: Super Lifeform Transformers, see Yukikaze (Vessel).

Yukikaze (ユキカゼ) is the younger brother of the Trainbot leader Shōki. Cold-weather operations is Yuki's gig, and in the snow, there's no stopping him. Naturally, he doesn't like heat at all. So much, in fact, that it severely hampers his ability to work with Kaen, who apparently puts out a lot of it. 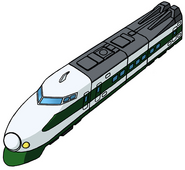 Voice actor: Ken Yamaguchi
Four Warriors Come out of the Sky, A Dream Is Born, Double Prime, Rebellion on Planet Beast, The Four-Million-Year-Old Veil of Mystery, Terror! The Six Shadows, Cybertron Is in Grave Danger, Part 1, Cybertron Is in Grave Danger, Part 2, The Shadow Emperor, Scorponok, The Dormant Volcano Mysteriously Erupts, Head On!! Fortress Maximus, Explosion on Mars!! Maximus Is in Danger, Explosion on Mars!! MegaZarak Appears, Return of the Immortal Emperor, SOS from Planet Sandra, Daniel Faces His Biggest Crisis Ever!!, Battle for Defense of the False Planet, Find MegaZarak's Weak Spot!!, Head Formation of Friendship, Mystery of the Space Pirate Ship, Ultra Magnus Dies!!, I Risk My Life for Earth, Miraculous Warriors, Targetmasters (Part 1), Miraculous Warriors, Targetmasters (Part 2), The Master Sword Is in Danger!!, My Friend Sixshot!, Duel on the Asteroid, The Final Showdown on Earth (Part 1), The Final Showdown on Earth (Part 2)

Yukikaze (or someone who looks a lot like him) was part of a big crowd of unhappy Cybertronians who made Prowl look really stupid when he tried to make a speech assuring them that everything would be okay after the collapse of Shockwave's supposedly-benevolent rule. Skyfire

Yukikaze transforms into a Tohoku Joetsu bullet train engine. He also forms the left leg of the team's combined mode Raiden, though he can also form the right leg instead if you're so inclined.

The entire Trainbot team was sold both as individuals and in a six-bot Raiden gift-set. All six toys in this set were identical to their individual releases.

An exceedingly simplified version of the entire Trainbot team was made available as part of the Transformer Jr series. Each individual has a (stumpy) representation of their larger robot modes, and could combine to form a stumpy Raiden.

The Trainbots were re-released during Zone in new packaging, and only as individuals, never in a box set. The toys are identical to their original Headmasters incarnations.

Retrieved from "https://transformers.fandom.com/wiki/Yukikaze?oldid=486085"
Community content is available under CC-BY-SA unless otherwise noted.