Start a Wiki
The name or term Wreckage refers to more than one character or idea. For a list of other meanings, see Wreckage (disambiguation).

Wreckage is a Decepticon from the live-action movie continuity family.

Cold, distant, quiet. Wreckage is the counterpart to the hot-wired Brawl. Deliberate and methodical in his attacks, he enjoys watching his foe squirm in agony as his twin swords cut deep below their armor. Circuits popping and vital processors sizzling to uselessness are the music he longs to make, and none of the Decepticons can argue with his taste for making Autobots suffer.

Wreckage was one of several Decepticons under the command of Starscream during the battle of Tyger Pax. He was finishing off an Autobot with his sword when Brawl arrived with news that Megatron knew where the All Spark was located. After witnessing the successful Autobot launch of the All Spark and Megatron's subsequent pursuit of it, Wreckage left Cybertron with Starscream's group in search of their leader.

Arriving on Earth many years later in Afghanistan, Wreckage scanned and destroyed a human military carrier vehicle sent to investigate their planetfall. He was able to trace the location of the Bargam US airbase and jam their communications to prevent them from calling for help. Under Starscream's orders, Wreckage led the group to attack, initially confusing the soldiers with his vehicle mode. Whilst observing Barricade slaughter human soldiers the latter had tricked, Wreckage was hit with a localized electromagnetic pulse and disabled. Barricade was ordered by Starscream to leave their comrade behind, because either he would recover eventually, or if not, then it didn't matter. Planetfall The Reign of Starscream issue 1

After the battle at Mission City that claimed the life of Megatron, Frenzy's datatracts revealed that Wreckage's body had been claimed by Sector Seven and was possibly being rebuilt for their purposes. The Reign of Starscream issue 2

The data retrieved from Frenzy revealed that Wreckage had bought his survival by giving the humans information on the Cybertronians. The Reign of Starscream #4

When Optimus Prime leaves on the ship to help put Megatron and other Transformer remains in the ocean, he leaves the All Spark shard with Sector Seven. It was an ill-advised move on Prime's part as Wreckage who was being kept in a base in the Nevada desert, was brought back online, after having been in "hibernation." The shard shot through glass and embedded itself into his spark chamber. Wreckage was not happy. He breaks out of the chamber holding him and transforms to escape outside. Back in robot mode he yells at the people "WHERES SALAZAR THE GUY WHO THOUGHT I WAS HIS LITTLE EXPERMENT" AND " WHERES MEGATRON" he scans a nearby vehicle changing the color of his own earth mode to green. This does not go unnoticed when he his shot at. He turns to see 3 L.M.1 units running at him shooting, Wreckage calls them pathetic and starts shooting them and chopping them up with his arm blades, then when he is shot at from above he looks up to see Starscream. Starscream picks up Wreckage by the throat calling him a traitor but Wreckages slashes Starscreams shoulder causing him to let go, Wreckage responds by saying, "You're one to talk leaving me for dead in the desert." The two robots continue their fight but Wreckage proves to be stronger. As he has Starscream pinned down and is about to give the final blow Bumblebee shoots his hand off. Starscream apparently killed Wreckage and used his body as a shield. He threw Wreckage at them and blew him up.

"Flight of the Bumblebee" online game

Wreckage was one of a group of Decepticons who trapped Bumblebee in a canyon. He stood around on a rocky butte, walking back and forth and waiting for Bumblebee to drive up to him. When the impudent Autobot dropped in (nearly landing on poor Wreckage's head), Wreckage immediately opened fire, blasting Bumblebee over and over and over and over and over. Unfortunately, Bumblebee had the idea to shoot back, blasting Wreckage right out of the picture with just one shot. Flight of the Bumblebee

Wreckage transforms into an M1126 Stryker Infantry Carrier Vehicle in urban or arctic camo, armed with a M2 .50 cal machine gun and two other machine guns mounted extending out of the troop compartment. Unusually for a Transformer with a military vehicle alternate mode, Wreckage does not feature significant embellishments to his design, even though he is not a licensed toy. However, his white plastic obscures much of his sculpted detailing.

His Automorphing feature is activated during transformation by swinging his machine gun down, pushing it against a translucent red panel, which simultaneously raises his shoulders, lowers his torso, raises his head and extends his stomach-mounted cannon all in one movement.

Wreckage's robot mode is more traditionally Transformers-styled compared to most of the other Movie line toys. As with most mainline Movie toys, he features an excellent range of articulation. The smaller machine gun weapons feature flip-out energy blades that can be held in his hands, mounted under his forearms or on any of the wheels. They can also connect together to form an undocumented but certainly intended double-bladed weapon; mounting this on his forearm wheels gives him an awesome spinning blade weapon.

There is a minor issue on Wreckage where moving his arms down or towards his back at the shoulder will activate his Automorphing feature and begin to fold the torso back into its vehicle mode position. The best way to avoid this is to hold the grey gun plugging into his back in position while moving his arms.

Wreckage was repainted into a toy that looks like his new paint job in "Defiance", however, it is named Bludgeon, a homage to Bludgeon.

A 35-point "Uncommon" card, Wreckage is assembled form punch-out parts of two cards, which can be fit together to make either a robot or a tank. Since he uses the same parts layout as Brawl, his central cannon is considerably oversized when compared to his toy. 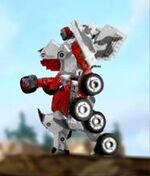 Wreckage appeared in several online games. Not the most impressive resume, but it's a living.
Retrieved from "https://transformers.fandom.com/wiki/Wreckage_(Movie)?oldid=373086"
Community content is available under CC-BY-SA unless otherwise noted.