Teletraan I: The Transformers Wiki
Register
Don't have an account?
Sign In
Advertisement
in: Animated Autobots, Animated Decepticons

View source
This article is about the garbage truck from Transformers Animated. For the Junkion from Generation One, see Wreck-Gar (G1).

Recently brought to life by the power of the AllSpark, Wreck-Gar's a nice guy really. All he wants to do is help. Trouble is he's highly suggestible, has a tendency to believe just about anything he's told, and he's a terrible judge of character, helping anybody who asks without thinking first, and getting into a whole load of trouble. He seems to have a lot of access to hammer space as the garbage bin on his back is an impressive bag of tricks, able to stash and deploy many useful (and even more useless) items at a moment's notice, or make them seemingly disappear forever. This ability is a bit of a mixed blessing, as Wreck-Gar will frequently confuse your request with something that sounds vaguely similar.

Apart from helping people, Wreck-Gar's primary goal in life is to acquire an identity. He never loses his good humour throughout, even though it's not easy for him, and will automatically take on whatever role is suggested to him to the degree that he will even malfunction if he's told he is. This makes him rather unpredictable and prone to making the wrong move at the wrong time. However, if he can learn to think for himself instead of relying on others, there's potential in this friendly mix-and-match bot. 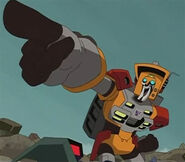 Wreck-Gar emerged from a garbage scow, activated by a shard of AllSpark energy that was close to Sari Sumdac's Key, self-aware but with no sense of history or identity. He tried to figure out what he was by studying objects in his environment and was briefly tricked by a food label into thinking he was high-fructose corn syrup. Spying a blimp proclaiming the Detroit Metro Police Department was "here to help", Wreck-Gar went off in search of the police for help. Once ashore, Wreck-Gar's clumsy curiosity prevented police officers from apprehending the Angry Archer, and the villain quickly conscripted Wreck-Gar as a sidekick, even giving the confused mechanoid his new, shorter name (as "worthless-wreck-walking-pile-of-garbage" was a bit overlong). Wreck-Gar helped the Archer disable an armored car, allowing him to steal a canister of unknown content right in front of the Autobots Ratchet and Bumblebee.

Upon seeing the Autobots and overhearing that they protected life and caught bad guys, Wreck-Gar decided he wanted to do that, slapped an Autobrand on his chest, and chased the escaping Archer. Throwing the Archer high into the air in order to "catch" him, Wreck-Gar only got the canister, as the Archer used a grappling arrow to escape. After being harshly told by Ratchet he was only good for one thing, GARBAGE!, Wreck-Gar proudly declared he was good for only one thing—GARBAGE!—and set about trying to deliver the stinky stuff to the entire citizenry of Detroit. (Detroit just happened to be in the middle of a garbage strike as well. Hooray!) The Autobots gave chase, having discovered the canister Wreck-Gar held contained experimental Sumdac Systems garbage-eating microbots, which Ratchet worried would be dangerously mutated by Wreck-Gar's AllSpark energy.

This mission became much more dangerous when he was approached by Lugnut, who was out to retrieve the AllSpark shard from Wreck-Gar's body. Thanks to Wreck-Gar's habit of repeating everything said to him (specifically, Ratchet's proclamation that "you're not an Autobot, and you never will be an Autobot!"), Lugnut believed the newcomer was just as much a loyal Decepticon as himself. When Ratchet accosted Wreck-Gar, Lugnut prepared his explosive punch, which Wreck-Gar took to mean the Universal Greeting, so he said: Ba, weep, grana, weep, nee bon. And gave Lugnut a high-five that left a colossal impact crater. As the Autobots ran for it, Lugnut told him they will "pay" for their insolence which Wreck-Gar thought of too literally and asked "Cash check or..."; Lugnut then told him to "ATTACK!" which Wreck-Gar mistook for meaning "a tack" so he gave him carpet tacks, thumb tacks and income tax. And when Lugnut left to catch the auto bots Wreck-Gar hopped on the pursuing Lugnut, pulling out the now-cracked microbot canister he'd gotten. A small amount spilled on Lugnut and began eating through his tail section. Wreck-Gar helpfully disassembled the tail, sending Lugnut plummeting somewhere in Detroit, with himself and the tail landing in a full garbage scow, which the nanobots quickly began to consume. From the shore, a group of bystanders began cheering as they saw the scow's load diminish. Now supplied with a fresh load of garbage and mistaking the cheers as intended for his delivery of said garbage, Wreck-Gar pushed the scow full steam ahead.

Wreck-Gar's attempt to deliver it was impeded by Ratchet, who first screamed at the junk-bot that the nanobots would destroy the entire city should they reach shore and told him to stop, Wreck-Gar told him no since since Ratchet told him Garbage was all he was good for. Ratchet tried to get him away from the barges controls calling him a "Malfunctioning slag heap" which prompted Wreck-Gar to malfunction in response (Ratchet's attempt to shoot Wreck-Gar's hand off the controls hardly helped) and break the controls at full speed.

Ratchet shouted that Wreck-Gar would destroy the whole city and said to him "You wouldn't dare do something that stupid" so Wreck-Gar repeated it as "I am Wreck-Gar, I Dare to be stupid". After saying that, his eyes turned Decepticon red and he said "I will destroy the whole city." Ratchet then used his magnets to stop Wreck-Gar but that made things worse when it got the ship to go faster so to stop Wreck-Gar, Ratchet did the hardest thing he'd ever had to do in his Autobot career: apologize for his insults and bad attitude. Ratchet told the now-even-more-confused robot that he could be whatever he wanted and to not let others decide for him who he was. Wreck-Gar decided he truly wanted to be a hero, and slapping the Autobot symbol on his chest once again, then to start being a hero he began vacuuming up the nanobots. They all got off the ship but the nanobots began to overload within his backpack and as Wreck-Gar tumbled off of what was left of the scow, he cried out his thank-you to Ratchet. An explosion of AllSpark energy burst from the water, and all Ratchet's magnetic power could retrieve was random junk from Wreck-Gar...

But at the bottom of the lake, Wreck-Gar was still online so he woke up and smiled to himself, a hero. Despite being buried up to his shoulders, he assured the fish passing by he was there to help... but first... could somebody give him a hand? Or a fin? Garbage In, Garbage Out

He makes his triumphant return when he is shown popping out of the lake where Sari Sumdac, Snarl, and Scrapper are traveling on a raft from Dinobot Island to Detroit. He is one of the members who form the Substitute Autobots and assists Sari to stop Soundwave's control of the Autobots and the humans. During the fight, he used an accordion to "counter" Soundwave's music. When Sari tries to attack Optimus, the controlled Autobot uses Wreck-Gar as a shield to protect himself (Wreck-Gar isn't actually harmed, except he gets knocked out by a bathtub that exploaded from his backpack). In the aftermath of the fight, Wreck-Gar is seen cleaning up the wreckage and posing as Santa Claus as he delivers garbage to all "the good little children". Human Error, Part 2

Wreck-Gar transforms into a garbage truck that looks just like "Weird Al" Yankovic he does in the show. He comes with slider-activated articulated lifting arms. He also comes with two translucent blue energy blades that can store in his canister, emerge at the sliding of another lever, and clip onto his forearms in two different configurations. He's very well articulated, including fingers jointed at the first knuckle, and his big feet make him easy to stand. He also has a facial expression that would not seem far out-of-place on Al himself. He doesn't have an Autobot Symbol on his chest, but he does have one on the left side of his cab in vehicle mode. Contrary to the stock photography, his optics are indeed the clear blue plastic that most Autobot figures have. This toy is pretty cool.

Much like Flytrap, the Renegade GoBot, he goes from a good-sized robot to a depressingly small garbage truck. Must be something inherently humbling about that particular alt-mode. But, hey, it's a "Weird Al" toy! How slagging awesome is that?!