This article is about the Maximal wolf. For the Predacon wolf from the Japanese Beast Wars reissue series, see Wolfang (BWTS).

Wolfang is a quick and agile loner who likes to hunt Predacons in beast mode. Upon transforming into robot mode, he likes to use the "secret attack launcher" that was his beast mode's tail.

On their way back to Cybertron, Rattrap recalls meeting three unknown Maximals named Wolfang, Bonecrusher, and Optimus Minor, when they save him from Dinobot 2 in the wilderness. He asked them to join the Axalon's crew, but they declined because of some other mysterious purpose that they couldn't elaborate on. Wolfang and the others asked Rattrap to keep their existence a secret, and he acquiesced. Ain't No Rat

Wolfang was one of the protoforms left behind by the crew of the Axalon on prehistoric Earth. He was activated and put in chronal phase by Razorbeast at Magmatron's request, but was protected from Magmatron's Predacon shell-program by Razorbeast's viral code. He was one of the first Maximals Razorbeast hooked up with, and participated in the Maximals' failed attempt to send a distress signal back to present-era Cybertron. The Gathering However, upon return to Cybertron, he was slaughtered in the battle against Shokaract. The Ascending issue 4

Note: The Transformers Summer Special story was originally going to be a prologue for Dreamwave's Beast Wars series. After Dreamwave collapsed, IDW picked up the project and Simon Furman reworked the original plan into The Gathering; as a result, the three new Maximals from Dreamwave's story figured prominently into IDW's first limited series.

Wolfang transforms into a wolf. In robot mode, his mutant head flips down to cover his normal head. His wolf mode's back becomes a shield while the tail becomes a spring-loaded missile launcher in robot mode; two anchor-shaped missiles are stored in Wolfang's midsection.

This mold was redecoed to make the Predacon also named Wolfang, and retooled to make K-9 and Max-B. 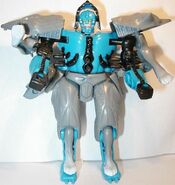 Retrieved from "https://transformers.fandom.com/wiki/Wolfang_(BW)?oldid=384395"
Community content is available under CC-BY-SA unless otherwise noted.