This gallery contains images of Windblade.

You have some decent moves

I was sent by Primus

I've hunted every 'Con I sensed since then

Let's crank our pistons and cross some distance! 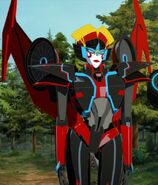 What are you doing? Get Down!

What do you want Buzzbeak?

It's not everyday Windblade gets lectured by Strongarm 1

It's not everyday Windblade gets lectured by Strongarm 2 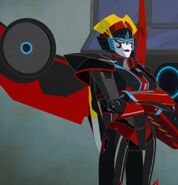 If Big Nasty wants that staff, keeping him away from it is job one

Windblade and Clampdown fighting against each other

Windblade with her team in the season 2 theme

I'll snap you in two if you don't stop that kind of talk. (Windblade takes her threats seriously)

Bee's still having problems getting his team to hold hands

Despite what Sideswipe says, he just wants to be wherever Windblade goes

Please Sideswipe and Strongarm, stop mentioning Windblade in your arguments

Can you hear me now?

If Ratchet was there, he could've prevented Optimus from mountain climbing

Going Up (Where's an elevator when they need one?)

Oh great, giant hailstorm on a mountain (60%-98% chance of being taken out by a giant snowball)

This won't end well (Optimus, you should've imagined an umbrella)

Windblade Vs An Avalanche

Away Team in Desert Camouflage

If anything were to happen to him when I could have prevented it, I'd never forgive myself

Windblade and Strongarm: Ready for Battle!

That expression is why Windblade's awesome.
Add a photo to this gallery

Add a photo to this gallery
Retrieved from "https://transformers.fandom.com/wiki/Windblade_(RID)/Gallery?oldid=452805"
Community content is available under CC-BY-SA unless otherwise noted.