Teletraan I: The Transformers Wiki
Register
Don't have an account?
Sign In
Advertisement
in: Cybertronian, Primes, Thirteen,
and 4 more

Vector Prime is one of the Thirteen and is the interdimensional traveler who spent most of his life in the multiverse, observing it, and occasionally stepping in to help. It is said that as Guardian of Space and Time, he can access to every alternate reality and could reverse/stop time itself. However, Vector Prime is still bound by certain laws of time. It is said that after living outside of time for so long and having a non-linear view of events Vector Prime can never die and only be locked out of certain realities.

Vector Prime was among the Thirteen created by Primus to defeat Unicron and witnessed the activation of the Well of Allsparks. Vector Prime was a very ideal Prime who saw good in everyone. He understood the moment of rage where Megatronus Prime, the Fallen, murdered Solus Prime. When it was discovered Liege Maximo was plotting against the Primes, the remainder cast him out as well. In despair, Vector Prime created for himself a pocket dimension only accessible to others by the Blades of Time which he entrusted to Nexus Prime.

As Nexus shattered himself into five pieces, the Blades of Time were scattered across Cybertronian colonies and guarded by one of Nexus' selves.

Using his dimension as a "home base" of sorts he spent his life exploring all of time and space and even parallel universes, intervening to aid in times of major crisis.

Millions of year later, Vector Prime met Optimus Prime who had reassembled the Blades of Time and whom he had been expecting for a while. He agreed to aid the Autobots and was surprised to learn Alpha Trion was still online. He then wondered how many of the Thirteen might still be out there.

In Battlegrounds, Part 1, when Megatronus threatened to return, endangering both Earth and Cybertron, Micronus Prime brought Optimus Prime before Vector and the other four Primes who dwelled within the Realm of the Primes. Speaking for the group, Vector announced that they could sense Optimus has not yet completed the necessary preparations that would allow him to safely receive a portion of power from each of the assembled Primes so that he could effectively combat Megatronus, but an impassioned speech from Optimus convinced them to go through with the power transfer. They were successful in transferring their powers to upgrade Optimus and send him to Earth. 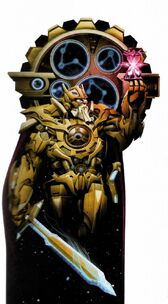 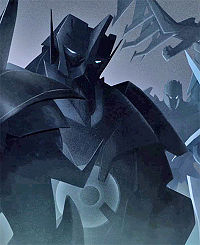 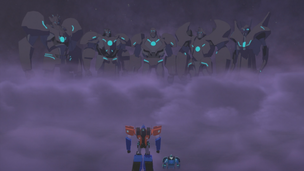