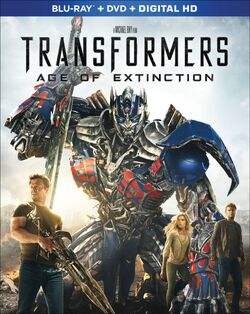 Craving more Transformers?? No worries, we have an exclusive clip from Age of Extinction AND news about the upcoming DVD release just for you! Paramount Pictures’ $1 billion worldwide blockbuster Transformers: Age of Extinction will be out on September 30, 2014 on Blu-ray, Blu-ray 3D, DVD, and VOD. If you can hardly wait, the film will be available to own two weeks earlier on Digital HD September 16, 2014!

The Transformers: Age of Extinction four-disc Blu-ray 3D Combo Pack and three-disc Blu-ray Combo Pack feature more than THREE hours of bonus content, including an in-depth interview with Michael Bay, a look at the design process inside Hasbro Headquarters, and more. For an idea on what awaits you, check out the exclusive behind the scenes clip from the Blu-Ray now! Keep scrolling beyond that for a full list of what is on each disc of the Transformers Combo Pack!

The Blu-ray 3D Combo Pack includes ALL of the above, as well as a Blu-ray 3D with expanded images as seen in IMAX theaters!

Retrieved from "https://transformers.fandom.com/wiki/User_blog:Gcheung28/Exclusive_Transformers:_Age_of_Extinction_Behind_the_Scenes_Clip?oldid=425496"
Community content is available under CC-BY-SA unless otherwise noted.