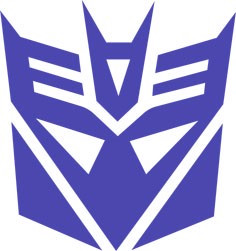 A Bit About Me

Before we start anything here, You should probably be warned, I in no way tolerate rudeness and plan to consistently and indiscriminately call it out wherever I see it here on Teletraan-1. Now, lets continue:

Hey hey, lets skip introductions and get right to the point! Ever since i was a young child i have LOVED science fictions and the tech involved in them in, namely, robots! My toy box was cluttered with star wars ships and droids and also what i much later in life would come to know as G1 transformers. "Wait, that implies you didn't know they were Transformers!" you may be saying. That is correct. You see, when i was young, my mother and i would often go to yard sales. Many of the toys i had, i had gotten at yard sales! Seeing that i was born in 1992, i missed G1, and when i was young and would watch beast wars, i had no idea what was going on. Perhaps when the original fans were too old to be playing with these toys and decided to sell them, i was the cute little child to snatch them up at the yard sales. I had what i would later find out were the supergobot Cy-kill, a Rodimus Prime without the trailer, the pretender with out the shell, Bomb-Burst and probably countless others that have slipped out of memory through the ages. I retain fond memories of these figures, but tragically, no longer have them (my mother decided since i refused to clean my room, it was a good idea to trash all the figures i loved so much.) I still have fond memories of sitting on my bed, and having bomb-burst and cy-kill have adventures on the rocky hills of my bed covers. As i aged, i phased out collecting robots and such.

When i heard about the 2007 movie coming out, i was very excited. It rekindled my passion for robots that turn into stuff. I acquired the original G1 Cartoon and watched it all. I am currently in the process of watching all transformer shows released in america (i am currently still on beast wars). I have now truly become a transformers collector. I purchased many of the movie line figures, and obtained what i could of past lines (Classics Grimlock, Cybertron Scrapmetal and 20th Anniversary DVD edition Optimus Prime). I plan on obtaining a large chunk of the animated and universe line, and there is no doubt in my mind i will be getting the 25th anniversary reissue of Optimus Prime. I plan to attend botcon, but being as young as i am, its hard to get transportation to other states for a transformers convention.

I want to be an outstanding contributing member. I really want to help and make this wiki the best it can be, as i am sure any user of this site does. However, i have some limitations... I have never in my life picked up a transformers comic, and i still have yet to watch RiD and most of the unicron trilogy. Also, it has come to my attention that i come across as...well...a total bitch. I really am not trying to be. it just happens and i apologize in advance! I always mean well, please understand that. I do feel however that i am a very funny person (i constantly am complimented on my wit) and i definitely feel that i can contribute to the humor of the site greatly. I am trying not to fight, especially with those who are outstanding members of the community, but sometimes its hard. Try to give me some slack though, i dont have full understanding of policies, and setups and all that. If you can help me, it would be really appreciated, don't be harsh, be understanding! like i said, i really want to be a good contributor, if you can send any advice, go right ahead.

Beliefs I hold tightly to:

Retrieved from "https://transformers.fandom.com/wiki/User:Skyglide?oldid=207056"
Community content is available under CC-BY-SA unless otherwise noted.