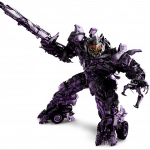 Hey there, I'm an 23 year old from New Zeland. I love the Transformers franchise; I first became aware of it midway through the RiD cartoon series. I thought the Unicron trilogy was alright, and some parts of G1 are okay too, but I dislike the Beast era and Animated. But the Michael Bay film trilogy, G1 IDW comics and Prime are without a doubt my favourite parts of the franchise.

I am also a contributer to the Primeval, The Almighty Johnsons, Marvel-Movies and Matthew Reilly wikis.

As much as I would love to have another live action film, it would clearly be difficult to come up with a good story. That and so many of the main Decepticons (Megatron, Starscream, Soundwave and Shockwave) are now dead. I mean sure, they could resurect Megatron again, possibly into Galvatron, it would just be that they would need a new method, that or have a completely new Decepticon leader. If it were me writing, I'd just have it that before Megatron died he backed up his memory into Igor, who would go on to create a new body for his master and thus resurrect Megatron (kinda).

Unicron would be a nice addition to the franchise, and it has been discussed before, and the animators probably would be willing to take on the challenge of such a gigantic robot, escpecially after Devastator and the Driller. I'd definately like to see some flying Autobots thrown into the mix, new combiners, and triple changers (now there's a challenge). Throw in the death of some human characters, add a visit to Cybertron (if it still exists anyway) and explain the Allspark's and Transformers' origins, and... well, who knows?

Though I'm glad that they've announced a new film for 2014, I'm really hoping that its not a reboot, although I doubt that they would get the same production crew if that were the case, and Ehren Kruger reportedly had ideas for a sequel to DOTM.

Over the past few years I've noticed that Hasbro has (in my personal opinion) been releasing too many new molds of the same characters. Bumblebee is the best example of this, having had seven different Deluxe molds and dozens of repaints, which is unnecessary. The odd repaint is fine and a mold update can't be argued with, but they don't need to make a new one every month. Also they made a Leader class figure which is also unnecessary when they could have instead created a Leader Megatron. The same goes for Optimus, why make a new Voyager figure when there was already a highly accurate one at that size?

The Deluxe Optimus mold was also a waste, in the local stores in my city they stocked up to two dozen five months ago, most of which is still sitting on the shelf. The MechTech weapons took up too much of Hasbro's buget when they could have created new molds for old characters, like a Voyager Ratchet. Even charcters who didn't recieve figures like Crowbar, Hatchet and Dino/Mirage could already have ones if there weren't things like Nitro Bumblebee, Deluxe Starscream and Ratchet when they had perfectly good figures before.

Also with the recent Prime figure mess, with the First Edition Optimus, Bulkhead, Bumblebee and Cliffjumper (which are by far more acurate) being canceled with their RiD mold counterparts taking over. Why would Hasbro create new molds of already acurate figures when they could have stayed with the FE figures? Even if they didn't fit with the revealers or powerisers gimmicks they could have re-released them with new parts to fit.

The answer to all this is simple; Hasbro just wants to show off that they can make as many new figures as they can. If for example they did less Bumblebees they could probably save themselves a lot of money, because people aren't just going to buy the same figure over and over again if they already have some version of it. Thus Hasbro needs to sort out its priorities and actually look at what will happen when they distribute.

Retrieved from "https://transformers.fandom.com/wiki/User:Prime_Temple?oldid=414853"
Community content is available under CC-BY-SA unless otherwise noted.