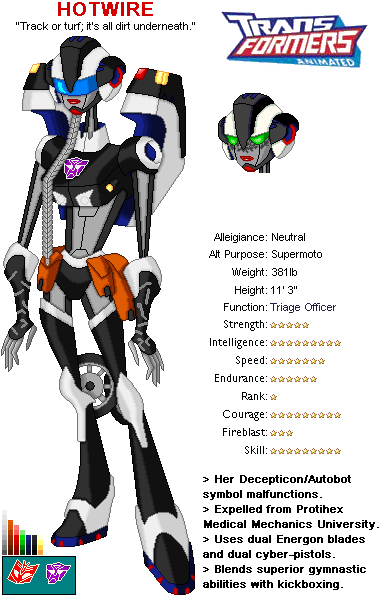 Harley is a gender-ambiguous user from the United Kingdom. Harley has written many works of fanfiction under many web-names and in numerous fandoms. If you doubt his, her or its word you can contact the writers to check, since Harley has a terrible tendency to leave his or her e-mail address lying around so that people can tell him (or her) how great he (or she) is, or just send him (or her) spam.

Who Is Harley Quinn hyenaholic?

It relates to the Harley Quinn of DC Comics. Harley Quinn had two pet hyenas known as Bud and Lou. Originally Harley was a Lion King fan of the hyenas, and needed an original username for Ezboard. Harley likes to be recognised, so even though his or her fandom has changed, his or her name has not.

Who Are Harley's Favorite Transformers?

What Does Harley Know About?

Harley knows about many things. But Harley has a tendency to specialise in a few things and these are a short list of the things Harley has specialised in over the years.

Is Harley a Girl or a Boy?

You guess. Harley likes it when people get it wrong. It makes him or her laugh. And face it, even GUYS know Animated Prowl is sexy.

Does Harley Have Transformers toys?

I've just started buying them. I'm not a total fanatic just yet, but I do have lots of them from the Transformers Animated (toyline). And more coming. And they're not toys, they're figurines.

Yeah, that's an image of one of my Transformers Original Characters, Hotwire. Made it myself for free, out of official Transformers Animated Arcee art. This is no place to go into her personality, since she's not an official Hasbro character. Go track down my fanfiction if you want to know about her. Yeah, I write fanfiction.

Retrieved from "https://transformers.fandom.com/wiki/User:Harley_Quinn_hyenaholic?oldid=246816"
Community content is available under CC-BY-SA unless otherwise noted.