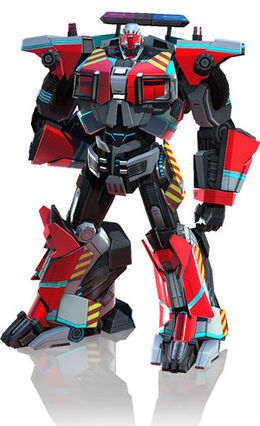 Triage is an Autobot medic featured in the game Transformers: Universe.

Triage doesn’t seem the medic type at first glance. When the battle’s raging, this short fused Autobot is just as likely to take a few shots at Decepticons with his built-in defibrillator than he is heal up his allies.

Triage was among the Autobots who were on board the Arclight when it was shot down over Central City. He survived the crash and proceeded to take part in a series of battles against the Decepticons who had come to Earth aboard the Leviathan.

Retrieved from "https://transformers.fandom.com/wiki/Triage_(Autobot)?oldid=455160"
Community content is available under CC-BY-SA unless otherwise noted.