Transformers in other media

Mathilda Lando, one of the protagonists, is watching an episode of The Transformers on the television.

The main character's son is watching an episode of Transformers: Armada on the television.

In the episode "The Courtship of Stewie's Father", it is revealed Soundwave works at the Pawtucket Brewery after Opie's promotion allows him to take his place. He ejects a cassette that turns into a photo frame. The picture reveals he has a human wife named Denise, and has three kids with her.

In the episode "Games People Play", when Peter is teaching Chris in the garage, on the wall is a calender, there is a picture of Tracks' alt mode, a blue Chevy with flames on the hood, on the calender.

Not Going Out is a British comedy show by BBC, starring Lee Mack and Tim Vine.

Lee and Tim go to their usual bar:

Lee: What are you doing?
Tim *scoffing load of steroids*: These are like Energon to a Pterosaurs.
Lee: What?
Tim: It's Transformers — the original show, not the movie, that was a disappointment.

Optimus Prime is going to the toilet a lot, he goes to Ratchet and discovers he has prostate cancer, when he dies he transforms into a coffin. There is then a message from Optimus Prime telling the viewers to get regular prostate exams.

Contains many Transformers characters, but features the character Soundwave.

Contains many Transformers characters, but features the character Jazz.

Contains Optimus Prime in place of the Tin Man.

Optimus Prime and Megatron appear in the part "Untitled robot parody" from the episode "Treehouse of Horror".

The Story of Tracy Beaker

The Story of Tracy Beaker is an British teen drama, set in a children's home.

In one of the episodes during 2007, there is a commode Transformer who is a parody of Optimus Prime. He is also voice by Tesshō Genda, who play Optimus Prime in the Japanese dub of The Transformers. 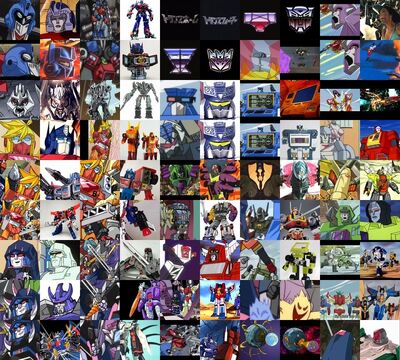