Start a Wiki
Transformers: The Ride-3D is an immersive, next generation thrill ride based on Micheal Bay's Transformers film franchise, the ride is found at Universal Studios Hollywood, Orlando and Singapore.

As a N*E*S*T recruit, you’ll find yourself on the front lines of an intergalactic war between the Autobots and Decepticons. You’ll fight alongside Optimus Prime and Bumblebee, trying to keep the Allspark from falling into enemy hands. 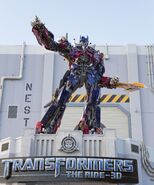 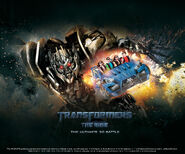 Add a photo to this gallery
Retrieved from "https://transformers.fandom.com/wiki/Transformers:_The_Ride?oldid=417942"
Community content is available under CC-BY-SA unless otherwise noted.