Tox-En is a type of energon that causes nausea (to Cybertronians), paralysis, and then death. It also makes them weak and slow and the only known way to destroy it is by lava.

Tox-En was also the fourth Iacon relic to be found in season 2.

During the Great War, Megatron figure out how to refine and weaponize Tox-En for his Decepticon chemical warfare to wipe out the Autobots. Bulkhead mentioned that he witnessed an entire unit of his fellow Autobots got wiped out due to exposure of Tox-En unleashed in battle. Sometime, the Autobots managed to capture a chunk of Tox-En and placed it in Iacon on a special containment unit. During the final days of the war for Cybertron, the relics were ejected to Earth. Bulkhead manage to find the Tox-Em and battled Hardshell for the relic. Eventually Bulkhead threw the last piece to Hardshell as he fell into a volcano. The Tox-En was extinguished as it melted in the lava inside the volcano. 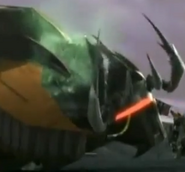 Add a photo to this gallery
Retrieved from "https://transformers.fandom.com/wiki/Tox-En_TFP?oldid=458236"
Community content is available under CC-BY-SA unless otherwise noted.