The name or term Topspin refers to more than one character or idea. For a list of other meanings, see Topspin (disambiguation).

Dark of the Moon
The Last Knight

Top Spin is a character introduced in Transformers: Dark of the Moon.

Not a day goes by where Topspin doesn't get a new ding or scorch mark on his armor. His urge to succeed in spite of the odds have never dulled. Now a member of the Wreckers, he pushes himself to the limit in combat, going up against the biggest and baddest. And, usually he comes out on top... even if he ends up losing a limb in the process.

"If it isn't difficult, I'm not interested."
―Topspin [src]

Topspin, Roadbuster and Leadfoot prepare the pre-launch works at the launch site of the Xantium. He uses his claws to lift a metal beam on a carriage carrying an engine part for the Xantium.

He later joins the battle in Chicago. He and the other Wreckers tear an unfortunate Decepticon pilot into pieces, ALIVE.

He accompanies other Autobots to an empty building where the take refuge for a while and think of a plan. When they do, they all evacuate with cover fire from Optimus Prime and Ratchet.

After Optimus Prime is trapped by cables, he and other Wreckers go to help Optimus Prime, who later assists the other Wreckers in taking down Devcon. He fires at the Decepticon with his machine guns, while Roadbuster launches two missiles before he and the other two then climb on him and shoot him in the head. Dark of the Moon

Topspin among several Autobots that were given asylum in Cuba. He was pestering Seymour Simmons to play ball, and was told Simmons was busy, in which he stated "He always says that". While Simmons was on a phone call with Sir Edmund Burton, he repeatedly asked Simmons to go to the beach with him, in which Simmons told him to wait five more minutes. Eventually Simmons finished his call and went to the beach with him. The Last Knight

This version of Topspin is not weaponized, and is a small clean replica of the #48 Lowe's NASCAR. Despite his blocky appearance, he does have moving arms: one claw can open, the other is sealed but has a clip shaped cut out in the other for holding smaller weapons.

Topspin transforms into a weaponized version of Jimmie Johnson's #48 NASCAR racer. In robot mode he his very CGI accurate. The MechTech weapon changes from a cross bow-like weapon to a claw. 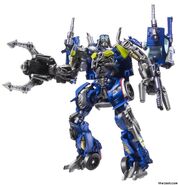 Retrieved from "https://transformers.fandom.com/wiki/Topspin_(Movie)?oldid=478945"
Community content is available under CC-BY-SA unless otherwise noted.