Teletraan I: The Transformers Wiki
Register
Don't have an account?
Sign In
Advertisement
in: Armada characters, Decepticons, Strategists,
and 3 more

View source
The name or term Thrust refers to more than one character or idea. For a list of other meanings, see Thrust (disambiguation).

Thrust, or "Squid-Head" to his fellow Decepticons, is one of Megatron's higher-ranking Decepticon soldiers (and a total wack job). His occasional Mini-Con partner is Inferno, plus sometimes he commands the Air Military Mini-Con Team.

His loyalty to Megatron is true at first. However, later it becomes just a cover. Like Sideways, his real loyalties come to lie with the Chaos Bringer.

(Note: Thrust's personality varied significantly between the comic and cartoon, see entries below for details.)

Thrust was a renowned tactician who joined Megatron on Earth in an attempt to improve his soldiers' relations. Tactician Thrust led the Decepticons to some short victories and summoned the giant battleship Tidal Wave to aid them, but was quickly dethroned of his rank after his failures began to stack up. Awakening Hated by all the other Decepticons due to his superior attitude, Thrust began to shrink into himself and got more desperate to prove his power.

Eventually, due to rants from a certain Someone about the shape of his head, Thrust joined Sideways with the lure of ultimate power, and managed to steal the three Mini-Con weapons that were the keys to reactivating Unicron's body. Thrust met his demise when he demanded Unicron attack his former master, Galvatron, only to have Unicron act totally unaware of Thrust's presence. Thrust fell into a seam on Unicron's surface which began to tighten and close as Unicron moved, and was crushed to death as Galvatron walked away.

Thrust was a somewhat cowboy-like entity that served the Decepticons loyally. He was devoted to Megatron, and followed his orders faithfully. Thrust first appeared via transwarp from Cybertron, carrying rocket boosters so the Decepticons could fly to the moon and capture the Mini-Cons stationed there.

Later, Thrust was sent to northern Alaska to back up Cyclonus, who was there to retrieve a fallen Mini-Con escape pod. First Thrust took a torch-blast to the face from Dune Runner of the Adventure Mini-Con Team, who was there to save his allies. Then he was knocked around by Cyclonus, who was feeling the effects of a triple-Powerlinx with the entire Destruction Mini-Con Team, which began to burn out his circuits and drive him mad with pain. When he finally came to, between Cyclonus' breakdown, the arrival of the Autobots, and Megatron using an orbiting solar scalpel to melt the ice that buried the escape pod, Thrust decided maybe he'd better get the heck outta Dodge.

Later, Thrust followed Starscream to a building lot in San Francisco, to investigate a weird transwarp disturbance. He got there just in time to get shot down by a herald of Unicron, who was seeking the refugee Mini-Con Over-Run.

When Megatron left to attack the Autobot base on Earth, Thrust was left behind to guard their Silver Ridge headquarters. He quickly had the crap kicked out of him by the other heralds of Unicron. Not a fatal beating, though, as he was repaired in time to journey back to Cybertron and face the planet-eater.

After the destruction of Unicron and the apparent death of Megatron, Thrust became a security officer in the new peacetime. He joined Hot Shot's unit and defended Toronto from the Terrorcon Divebomb clone-hordes when they attacked Earth. When Megatron reappeared, Thrust tried to rejoin his former leader, but Megatron completely ignored him, warping to his next destination. Multiplicity, Pt. 4

Thrust transforms into a dark green F-35 Lightning II fighter jet. In jet mode, he has two pressure-launch missile launchers, and a space to store his Mini-Con partner Inferno in his (Inferno's) truck mode. Aside from his robot mode, he also has an "assault" robot mode, which turns his torso around 180 degrees and extends his winged backpack; attaching a Mini-Con to the Powerlinx plug on his chest and pushing it up and down causes the backpack to move as a spinning blade.

This mold was also used to make Universe Sunstorm.

In Japan, Thrust was available both as an individual (well, with Inferno) and in a larger boxed set that also included the Air Military Mini-Con Team. There are no notable difference between the Japanese and US releases.

Part of the later-series "Powerlinx" line of redecos, Powerlinx Thrust got a new color scheme that was a "reversal" of the Generation One "conehead" Dirge, primarily light brown with dark blue and black accents.

The packaging for this release, however, showed him in a color scheme more like his G1 namesake, burgundy with black (and some bone-white accents). His coloration was changed to the brown-and-blue too late to change the packaging photography.

The change was made due to Takara choosing a mostly red color scheme for Demolishor (Demolishor's name in Japan was Ironhide and the color scheme was based on the G1 version of said character). Originally Hasbro had different plans for their redeco of Demolishor. But as a result, they changed their plans for Demolishor to match the animation, which was already based on Takara's products. Hasbro then thought there would be too much red on the shelves at the time, so Powerlinx Thrust's coloration was modified, as the figure would not appear on the cartoon. There are some similar colors used between the two versions of the toy, likely due to the quick change in scheme.

Although Hasbro at one point expressed interest in releasing a running change variant of Powerlinx Thrust that reflected the originally intended color scheme[1] (which resembles Generation One Thrust), they never went through with it, at least not on the North American market. However, Takara released red Powerlinx Thrust as a "USA Edition" in Japan, exclusively available at the Toy's Dream Project members store Toycard, in Hasbro packaging (Takara had previously also released a "USA Edition" version of Powerlinx Thrust in Hasbro's colors, this time exclusively available at Laox stores).

Curiously enough, Hasbro actually did produce a small run of red Powerlinx Thrust, but never released it on the North American market. Instead, the toy, in European packaging, popped up in Israel in mid-2004, later followed by sightings in Italy, Portugal, Spain and the United Kingdom. The toy was even found in Australia, but only in stores that also occasionally sell toys imported from other countries, and again in European packaging. Furthermore, some of the European countries saw the toy being sold at instant discount prices, which suggests it was old Hasbro warehouse stock which had never seen a shelf release that was now being cleared out. 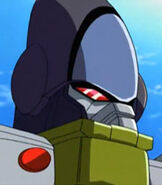