"No one puts Terrashock in a tiny box!"
― Terrashock after breaking free from his stasis pod in W.W.O.D.?

Terrashock is a Claustrophobic Bison like Decepticon Buffaloid enforcer His-mode is a Cybertronian armored truck. He is short on brains, but big on muscles,speed, and rage.

Terrashock was working as a thug for Contrail who sent him to hunt down some Cybertronian who Crossed him up before he was imprisoned on the Alchemor before it crashed on Earth. Eventually, Terrashock's stasis cell was found by some human scientists and was brought to the Crown City Museum.

Terrashock eventually broke out of his stasis pod and stumbled upon Russell. He knocked Sideswipe out of the way and made his way through the main areas of the museum. While he believed he was still on Cybertron, Terrashock was in search of Contrail and was caught up in the museum's displays. In a buffalo exhibit, Terrashock was mistaking a robotic buffalo for another buffaloid enforcer. Strongarm attempted to bring Terrashock down but failed as she was thrown unconscious Due to his strength speed and displayed invulnerably to lasers such as ones shot from her Decepticon hunter. Terrashock mistook a museum planetarium for a transmitter, and attempted to contact Contrail with it until he was confronted by Grimlock, who attempted to jump Terrashock and was quickly knocked aside. Terrashock eventually stumbled on an exhibit about water, where Sideswipe tried to jump him while he was alarmed by a video of a tsunami, but was thrown against a wall. Terrashock charged toward the front doors of the museum, where he engaged Bumblebee. Terrashock quickly knocked the Autobot through the doors before he transformed and drove off into traffic. Terrashock continued to recklessly drive along the highway, yelling for Contrail, until he was intercepted by Bumblebee's team, who had come up with a new plan in bringing the Decepticon down. The quartet managed to herd Terrashock away, like cowboys herding a herd of steer, from traffic before Bumblebee tripped him up, leaving Terrashock opened for a body slam by Grimlock. The Autobots loaded the unconscious Decepticon onto Strongarm's trailer and drove off into the sunset.

After Steeljaw and his gang broke into the scrapyard, Terrashock's stasis pod was deactivated. He was quickly re-frozen by the Autobots before he could escape from his pod. 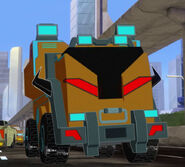 Terrashock in his vehicle mode.

Add a photo to this gallery
Retrieved from "https://transformers.fandom.com/wiki/Terrashock?oldid=481660"
Community content is available under CC-BY-SA unless otherwise noted.