Teeth are a part of Transformer anatomy sometimes found inside the mouth, surrounding the tongue. Though Transformer teeth seem similar in structure and appearance to the teeth of humans, what function they serve on Transformers can be a subject of debate.

Humans use teeth primarily for breaking down the foods they consume into digestible portions, but Transformers fuel is mostly, if not entirely, liquid. Human teeth are also used to help form certain sounds in their language, in conjunction with the tongue. Transformers are capable of human speech, and sometimes are shown to have both teeth and a tongue, so it's possible their teeth may be used for communication. Two functions of teeth definitely shared between humans and Transformers are using them as a weapon and baring them to indicate hostility.

Transformers who have animal-based alternate modes tend to have teeth in those adopted forms. Most of these alt modes were acquired after contact with other planets such as Earth, so the inclusion of teeth in Transformer anatomy is often irrelevant to understanding why some Transformers have them. However, eons of conflict have taught the Transformers to take advantage of whatever weapons one can find, and some have taken quite a liking to teeth.

"I'll rip you to pieces with my bare claws, tear out your circuits with my teeth and spit your diodes back at you!"

―Scorponok demonstrates one use of Transformer teeth, On the Edge of Extinction!

Note: The only medium which avoided Transformer teeth entirely was the original cartoon, in which the inside of the mouth was depicted as a solid dark gray. In all other media, teeth were either uniformly used (such as in Beast Wars) or their appearance varied by artist (such as in Marvel Comics). 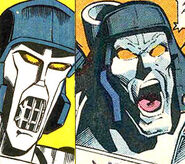 Don Perlin gave Generation One Megatron teeth when he felt like it.
I, Robot-Master!
Gone But Not Forgotten!

Transformer mouths had no interior detail in the original cartoon. Dull surpirse is not as dull (or surprising) if you have teeth.
TFTM

"Using teeth as a weapon," check.
The Last Autobot? 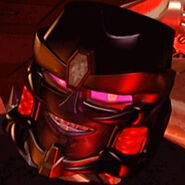 Teeth are helpful in creating a variety of amusing facial expressions. Yesss.
The Agenda, Part 3

One of Optimal Optimus's teeth was knocked out during a fight.
Nemesis, Part 2

Teeth can be used for eating JaAm.
Palace

A vanishingly-brief moment of somebody actually having a proper facial expression in Cybertron.
Ambush

I don't even want to know why he has teeth.
Transformers 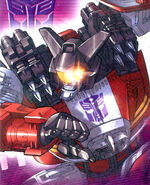 Or sometimes they are just part of an animation error.
Headmaster

Euweeka, Gold at wast. Hahaha.
Add a photo to this gallery
Retrieved from "https://transformers.fandom.com/wiki/Teeth?oldid=381094"
Community content is available under CC-BY-SA unless otherwise noted.