Galvatron, Cyclonus and Scourge travel back in time with a plan to destroy Unicron.

Galvatron, Cyclonus and Scourge travel back to 1986 from 2006 to escape Unicron. The time travel device causes three Autobots - Optimus Prime, Prowl and Ratchet - to be displaced to a holding dimension. Ironhide, Jazz and Hound go to spy on the Decepticons, certain that they are to blame for their leader's disappearance.

Galvatron usurps command of the 'local' Decepticons from Megatron, burying his former self and Soundwave under a rock fall. Then he takes the Constructicons off to begin building a giant laser cannon. The cannon will fire upon his return to 2006, destroying Unicron.

On Cybertron, the Matrix Flame, the embodiment of the Creation Matrix, is extinguished as Optimus Prime is removed from this reality. As a result Autobot resistance leader Emirate Xaaron sends Ultra Magnus to Earth to hunt for the missing Autobot leader and the Creation Matrix, despite him being a crucial part of Operation: Volcano, an Autobot plan to lure the Decepticons' most vicious killers into the open and destroy them.

On Earth Jazz is captured by Galvatron and tortured to provoke the Autobots into making a hasty attack. Unwilling to interrupt his mission, Ultra Magnus refuses to accompany his fellow Autobots.

The Autobots are humiliated by Galvatron and decide they need help. So they dig Megatron out from the rock fall and ally themselves with him. Under Megatron's leadership they successfully capture Scourge and plan to exchange him for Jazz. Starscream, seeking to gain power for himself betrays Megatron and the Autobots to Galvatron.

Galvatron tricks the Autobots by unleashing a remote controlled Jazz at the exchange, inflicting yet another defeat on them. While the exchange is underway Megatron attempts to destroy Galvatron's weapon but is surprised by Starscream and knocked unconscious.

Back in 2006, Unicron realises what Galvatron is planning and takes mental control of Hot Rod, Kup and Blurr and sends them back in time to sabotage Galvatron's plan. In 1986 they tell Ultra Magnus that Optimus Prime’s disappearance is related to Galvatron and he agrees to help them send him back to his own time.

Ultra Magnus attacks Galvatron and the two battle each other, keeping Galvatron distracted while Hot Rod, Kup and Blurr prepare their plan. Once they are ready they use a remote controlled Skywarp, disguised as Starscream, to destroy Galvatron’s weapon.

Enraged, Galvatron destroys “Starscream”. Knowing that Starscream is not destined to die until 2006 he becomes convinced that he had travelled back in time to a dimension other than his own and that nothing he achieves here will affect his future. He reluctantly decides to abandon his plan and returns to 2006 where he is punished by Unicron.

Satisfied with himself, Unicron returns Hot Rod, Kup and Blurr to the future. Once Galvatron, Cyclonus and Scourge return to their own time, Optimus Prime, Prowl and Ratchet return.

Ultra Magnus returns to Cybertron only to find that he is too late, Operation: Volcano has begun. The leader of the Wreckers, Impactor, dies saving Xaaron’s life, but the plan comes to nothing as Megatron contacts Cybertron and orders the Decepticons to abort their attack and return to their headquarters for transport to Earth. 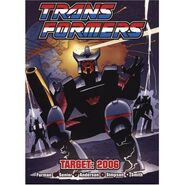 IDW TPB
Add a photo to this gallery
Retrieved from "https://transformers.fandom.com/wiki/Target:_2006?oldid=392019"
Community content is available under CC-BY-SA unless otherwise noted.