The Fallen is called Megs master, but the Deceptions master is Megs and he serves no one, but he allied with The Fallen.4DJONG 11:54, 21 June 2009 (UTC)

True Facts From Watching In Uk

3rd Mark Ryan does not voice Bumblebee he does not speak the entire movie, exept through the radio like the first movie.

will these be changed

They will be changed after the film is released in North America this coming Tuesday. Until then, no spoilers allowed. And please, remember to sign your post with four ~s next time. Xeno the Hedgehog 00:35, 20 June 2009 (UTC)

Jolt is not always in Volt mode, he was in robot mode when the autobots returned to base after Optimus's death, and again after Jetfire dies, to put jetfire's parts on Optimus. --bumblebeeprime09 18:28, September 29, 2009 (UTC)

What Do We Do About Obama, Swine Flu, and Recession?

In the movie, it was mentioned president Obama was moved to a bunker when the military declared the situation code delta. How does this affect the movie continuity and specific dating of events, including interference with real world politics? In Simmons' butchery, they go into the freezer where there are pigs, and Sam makes a comment about the swine flu. At college when Alice is trying to manipulate Sam in bed, he tries to change the topic by mentioning the economic recession (or at least I think it was there, but it was definitely mentioned somewhere when Sam was trying to change the subject of conversation). Such tie ins to the real world never occurred before in the prequel. --Darth shohet 01:33, 25 June 2009 (UTC)

The reviews are in. Ouch.

I concur, however I firmly believe that only the viewer can decide what's best for themselves; That's why I don't read movie reviews for any reason other than the screenshots included with them. Xeno the Hedgehog 03:57, 1 July 2009 (UTC)

I enjoyed it simply because I love Soundwave, and the fact that the Matrix was involved. And Alice was ALMOST as hot as Mikaela I like stuff asploding. I'm kinda irked that Soundwave was a satellite the WHOLE DAMN TIME, and that Sideways died really quick, but hey, at least Megs' head is SLIGHTLY more bucket-like than before. Lol, I've spent $145 on ROTF toys already.--KaotikusNemesis 14:45, 2 July 2009 (UTC)

Moved to Talk:Revenge of the Fallen (franchise)

Revenge Of the Fallen in theaters

Okay, it starts getting my nerves. Please beware there are several thing easily to be confused:

A question to Transformers fans

Helo friends recently I posted a call to transformers fans to boycott Revenge of the Fallen in order to protest the ending of Transformers Animated. I'd like to say that thousands of members of the transformers fan base rushed to stand behind me and that the protest brought animated back. Well not really. In reality nobody was really gung ho about protesting. However as I and many others prodicted Rotf bombed in the box offfice ok so maybe bombed is too strong a word but it didn't exactly do a scectacular job it actually didn't do much better than the first one it might have done worse than the first. Spill.com gave it the raiting of a low rental and the movie preview critic predicted even before the first preview was aired that it would be all flash and no substanance and thats all it is visualls and no story or charecter development now I want to ask you a question do you think it was all worth it having Michael Bay pis on our childhood memories and filmmaking talent and using transformers to do it and do you think it was right to end TF Animated do you fans do you.—The preceding unsigned comment was added by 86.47.191.114 (talk • contribs).

I totally agree with you TX55 just because it made so much money doesn't meen the quality of the story or charechters was good. these things are the soul of any good film. Also I would like to ask you transformers fans what do you want from a good transformers movie without Michael Bay or the current writers what kind of story charecter directors and writers would their be.—The preceding unsigned comment was added by 86.47.191.114 (talk • contribs).

You know, I would seriously love it if next film they got rid of all the soldiers who seem to think they're the heroes of the film and all the characters who seem to have wandered in from an unfunny screwball "comedy" (the parents, Simmons, the geeks) and just told a story about Autobots fighting Decepticons with a couple of human helpers (don't have a problem with Sam and Mikaela, they're believable characters played by competent actors). And actually namechecked some of them so we don't have to go to the toy shop to find out who they were. Skteosk 11:25, December 31, 2009 (UTC)

In the article's trivia, it says that Transformerss are radioactive. Just because Frenzy was radioactive doesn't mean that all the transformers are.

Maybe Simmons used radioactive material when he was dealing with Frenzy in "The Veiled Threat". Jokerfan45 21:30, 4 August 2009 (UTC)

"Radioactive" doesn't mean lethal. As I understand it, beta radiation can't penetrate through very much and is easily shielded against, and alpha radiation is harmful only if ingested. Gamma radiation is the most harmful, but it isn't neccessarily the only type meant. And please, forgive me if I've completely screwed that up. I have limited knowledge from Fifth Form Physics, which was a while ago. - Specops306 - Qur'a 'Morhek 03:12, October 14, 2009 (UTC) 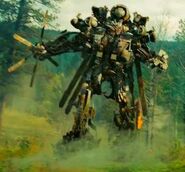 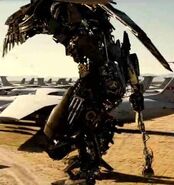 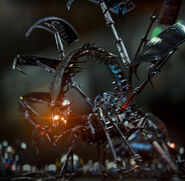 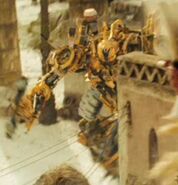 How come the rest of the Autobots didn't help Optimus before he died? Did Optimus really get that far ahead of them that they arrive at the last second? Einsteinium99 01:13, 16 August 2009 (UTC)

Fixing what that idiot did

Thanks for fixing that idiot's screwing up on this page. What a fucking idiot. He needs to be permanantly blocked from this site to prevent that from happening again.--WarGrowlmon18 22:22, October 14, 2009 (UTC)

Millenia is not an error.

MilleniUM is 1,000 years, to which MilleniA is the plural. Therefor, the event being much more than 1,000 years ago means that it can best be measured in Millenia, each one being a thousand years.

I know it was done to make sure the audience got the joke, but isn't Simmons statement of "I'm directly below" really out of character? He's trying to coordinate a tactical strike against Devistator in a limited amount of time, and in the middle of that, he throws in this non-sequitur that would have made the captain of the Stennis waste time asking for clarification. "Excuse me, Mr. Ulta-Serious. You're where?" "You heard me. What? You mean you don't have satellite imagery of the pyramid so that you can see when the robots combined together, there's a part of them that has a biological concidence with a human, even though in the first movie, I was adamant about how non-biological they are?" —RRabbit42 (leave a message) 04:56, January 31, 2014 (UTC)

Retrieved from "https://transformers.fandom.com/wiki/Talk:Revenge_of_the_Fallen_(film)?oldid=399913"
Community content is available under CC-BY-SA unless otherwise noted.