Teletraan I: The Transformers Wiki
Register
Don't have an account?
Sign In
Advertisement
in: Autobots, Deceased Characters, Soldiers,
and 8 more

My Partner (By Arcee)

Out of the Past (flashback)

"Was Tailgate weak like Cliffjumper?"
― Starscream mocks Arcee in their fight in Partners.

Tailgate was Arcee's partner on Cybertron during the Great War. He was captured and killed by Airachnid, which led to Arcee's shellshocked trauma.

Airachnid then killed Tailgate, after Arcee stated she didn't know coordinates of an incoming Autobot attack.

Arcee was then rescued by Cliffjumper and Bumblebee, but she would never stop grieving for his death. When being saved, Arcee said she couldn't save her partner.

Years after his death, Tailgate was still remembered. When Cliffjumper and Arcee were captured on a Decepticon warship Arcee refused to work with Cliffumper, fearing that he might suffer the same fate as Tailgate had. Cliffjumper then told Arcee he knew what happened to Tailgate, as he was part of the rescue mission that saved Arcee.[1]

When Cliffjumper was shockingly killed, Arcee had suffered the loss of another partner, the first being Tailgate.

Airachnid also constantly reminded Arcee of his death in attempts to intimidate her.[2][3]

When Starscream was an Autobot prisoner and him and Arcee were fighting, Starscream said: "Was Tailgate weak like Cliffjumper?" which enraged her.[4]

Arcee said to Smokescreen to keep on his guard because, she had already lost two partners, one being Tailgate and other Cliffjumper. [5]

Despite his supposed death, Tailgate was one of the Autobots blacklisted by the High Council for associating with Optimus Prime.[6] 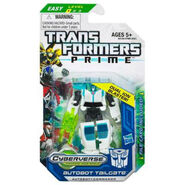 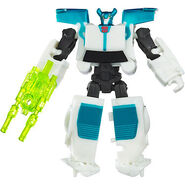 Tailgate's toy out of package 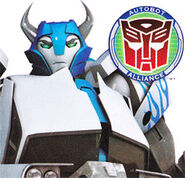 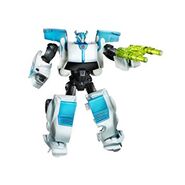 Tailgate in his debut episode

Tailgate about to be killed