Teletraan I: The Transformers Wiki
Register
Don't have an account?
Sign In
Advertisement
in: Articles in need of images, Characters, Decepticons,
and 3 more

View source
This article is about the 1986 Decepticon. For the 2003 Mini-con known as "Sweep" in Japan, see Run-Over.

The Transformers
The Headmasters

Sweeps are Decepticons from the Generation One continuity family. Sweeps are the minions of Scourge created by Unicron. Sweeps are visually indistinguishable from Scourge himself, although Sweeps do not necessarily have identical voices. Although only a few are seen initially during Unicron's threat, there appears to be an inexhaustible supply of them later on. That's actually a good thing, as Galvatron tends to shoot them. 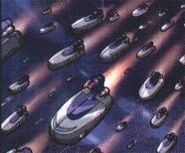 The original Sweeps were created by Unicron from fallen Decepticons, but the seemingly-infinite number suggests that Scourge or the Sweeps may possess self-cloning abilities similar to the Insecticons - altogether realistic, as the three original Insecticons were among the discarded bodies that Unicron used to form Cyclonus, Scourge, and their combined retinue. The Transformers: The Movie

Approach of the Demon Meteorite, Return of the Immortal Emperor

Japanese ID number: D-71
Well, while technically not "Sweeps", any additional Scourge toys you may own can easily function as Sweep toys, what with the characters being identical and all.