Surprise Attack is the thirty-seventh episode of Robots in Disguise. It first aired in the United States on March 09, 2002 on Fox Kids.

After Galvatron starts recalibrating his spark energy in the Decepticons to turn them into his loyal servants again, he puts Sky-Byte in command of the next mission, then he makes the Decepticons minions of Sky-Byte. So Sky-Byte goes out to follow Koji wherever he goes, in hopes that the boy will eventually lead him to the Autobot base. Of course, he does, and Sky-Byte tells Galvatron that the base is somewhere inside a parking structure. And that parking's only free for the first 20 minutes, and he needs some quarters. Down in the Autobot base, Side Burn is all up in Cerebros's face, telling him that he's an Autobot and needs to help protect Earth. Suddenly, Cerebros activates and explains how he and Fortress Maximus function. X-Brawn promptly points out the flaws in the system, right before the Decepticons attack the parking structure. The Autobots take evasive actions and use their "Oh ****, the bad dudes found our pad" plan, which involves all the Autobots going to one area and hiding, while Optimus leads the Decepticons and Predacons to that area with Cerebros via a different route. Sky-Byte thinks he's cornered Optimus, but upon further observation, he discovers that Optimus has actually led him and the Decepticons into a trap. Every single Autobot is there, and Sky-Byte's swears. There's a lake nearby, where nobody seems to notice the huge alien watercraft that is Galvatron just floating there amidst the swan paddle boats. That's also where our dear friend Kelly is. She sees a couple of Autobots and tries to ignore them by paddling away. After Sky-Byte figures out he's trapped, Galvatron pops out from hiding and announces his master plan to control Fortress Maximus. Then he brings out his huge command center thing and fires a barrage of bombs onto the Autobots. The Predacons promptly hide behind some rocks, and the two-and-a-half-episode-long battle begins. Ultra Magnus shows up, and he and Optimus form Omega Prime. Landfill forms and tries to make the first blow, but gets blown apart. Despite this, Omega Prime still calls Wedge "Landfill", but nobody seems to notice or care. Rail Racer tries to shoot the command center in the butt, but gets blown back by ass-rockets. Then Wedge tries to attack the center all by himself, running and ranting about how he has the spark of an Autobot, but gets blown back by more ass-rockets. But his courage is not wasted, as it activates Fortress Maximus. Galvatron transforms into hand mode, and we soon discover that it isn't only useful for catching doctors, it's also good for linking with huge purple command centers and fighting gigantic fortresses. Anyway, Fortress Maximus and Galva-command center duke it out, but in the end, Maximus knocks Galvatron to the ground. And there is much rejoicing. But not for long, because when there's twitching involved, which means he may be down, but he is still not out.

Note: All characters are listed in order of their first appearances in the episode. The time they appear is the time from the Japanese dub..

"Sky-Byte, unlike those traitors, the Predacons have always been loyal. You're the only ones I can trust."

—Mega—that is, Galvatron stating the obvious

—Sky-Byte's reaction to the change of plot

—The Predacon beast trio, on their emotional status

"A trilateral program consisting of bio-signature identification, motivational recognition and harmonic resonance calibration. As a singular entity, I will respond to the signature of any Autobot whose motivation is the protection of Earth. When fused with Fortress Maximus, I will respond only to the bio-signature of humans whose motivation is to aid and protect and in whom I detect no disharmonic residence of self-interest or desire for personal gain." —:Cerebros, in a tl;dr speech 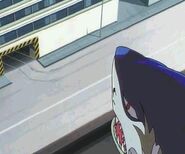 Time for a good revamping! 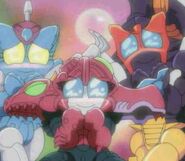 The truth behind the Predacons: They're Side Burn fangirls! 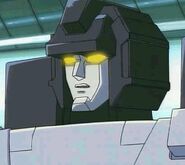 Cerebros! You got some 'splainin' to do!
Add a photo to this gallery

Retrieved from "https://transformers.fandom.com/wiki/Surprise_Attack?oldid=459194"
Community content is available under CC-BY-SA unless otherwise noted.