Start a Wiki
The name or term Strafe refers to more than one character or idea. For a list of other meanings, see Strafe (disambiguation).

Strafe is a Dinobot who transforms into a two-headed Pterandon. He is set to appear in Transformers: Age of Extinction alongside Grimlock, Scorn, and Slug.

Bumblebee decided to ride Strafe using the manual. At first he tried to jump on him from a cliff, then chased dinobuton finally tried to lure him, but all those attempts were unsuccessful. However, after a lot of practice to the Autobot managed to ride companion. Getting on a Dinobot

"This flying Dinobot strikes fear in his enemies when he swoops down on them from above! Convert, arm and attack with all the Transformers action you can handle! This Strafe figure is a high-powered fighter whether he's in robot mode or dino mode. With a sword in each hand, he'll be a match for any enemy in robot mode. And when he converts to vicious pteranodon mode, no enemy can hope to outrun him! Keep converting him back and forth so he can handle whatever his foes dish out!" 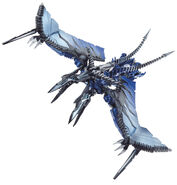 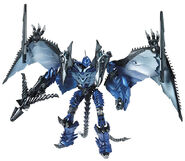 And somewhere Swoop is crying.

CGI Strafe featured in Transformers 4 Age of Extinction Featurette Dinobots VFX
Add a photo to this gallery
Retrieved from "https://transformers.fandom.com/wiki/Strafe_(Movie)?oldid=445323"
Community content is available under CC-BY-SA unless otherwise noted.