"If BUMBLEBEE is the most courageous TRANSFORMERS warrior, Stinger is the most devious. Built by humans and controlled by a shadowy organization, he is the evil counterpart to the heroic AUTOBOT, a DECEPTICON spy programmed for sabotage and destruction."

As Cade and Shane enter KSI headquarters, they and Bumblebee enter a room with a Pagani Huayra and a red drone slightly reminiscent of Bumblebee. After a KSI tour group passes, everyone winds down and Bumblebee transforms to see the red drone. Bumblebee then sees a plasma screen advertising for the red drone, apparently called "Stinger" and the woman on the screen says "inspired by Bumblebee, but better in every way." Enraged, Bumblebee plays clips of people swearing, then kicks over the Stinger model. Stinger, in Pagani form, is then seen alongside Galvatron, firing missiles at the dwarfed team of Autobots. Later, in Hong Kong, Stinger transforms alongside his fellow Trax Vehicons and later engages in a brawl with Bumblebee, now identical to Stinger other than the fact that he now transforms into a 2014 Chevrolet Camaro concept, previously a 1967 Camaro SS 1LE. Later, after the fight ended and Bumblebee shot off Stinger's head, he recited a radio clip: "I hate cheap knockoffs.", while he feeds Stinger's decapitated head to Strafe.

This toy is fully articulated, and has similar instructions to Bumblebee.

Toy does not have articulated legs.

A Multi-Step miniature version of stinger.

This toy has moving limbs, but is small. 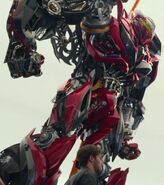 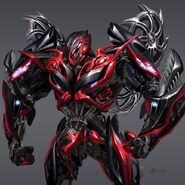