The name or term Starscream refers to more than one character or idea. For a list of other meanings, see Starscream (disambiguation).

Starscream is a Decepticon Seeker from the Transformers: Cyberverse continuity.

"Bumblebee"
―Ugh, Starscream. Obviously the Decepticons are not nice dudes, but Starscream is extra cunning. He'll sell you out to Megatron, and then Megatron out to whoever offers him power.

Starscream is the scheming second-in-command of the Decepticons and leader of the Seekers. A cunning warrior, Starscream is only out for himself. Loyalty is a foreign concept to him, and he will sell out anyone to Megatron. Of course, if someone promises him power, Starscream is also willing to sell Megatron out to them.[1] 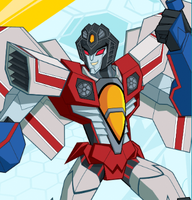 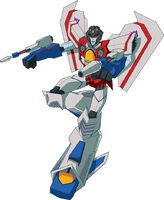 Retrieved from "https://transformers.fandom.com/wiki/Starscream_(Cyberverse)?oldid=484831"
Community content is available under CC-BY-SA unless otherwise noted.