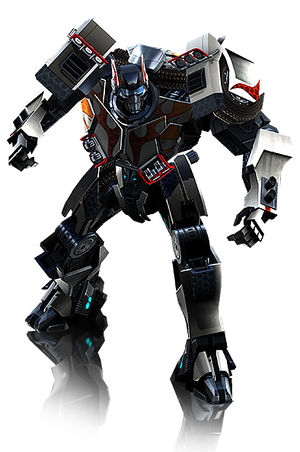 Sparkscape is an Autobot featured in the game Transformers: Universe.

Sparkscape loves a good bonfire on the beach as much as the next person… Except that when this flamboyant bot lets loose with his vapor gun, he’s more than likely to leave scorched earth in his wake. Luckily for his Autobot comrades, he comes equipped with as much healing power as he does firepower to help even things out, making him an excellent supporting soldier.

Sparkscape was among the Autobots who were on board the Arclight when it was shot down over Central City. He survived the crash and proceeded to take part in a series of battles against the Decepticons who had come to Earth aboard the Leviathan.

Retrieved from "https://transformers.fandom.com/wiki/Sparkscape?oldid=455041"
Community content is available under CC-BY-SA unless otherwise noted.