View source
This article is about the Generation One Decepticon. For the Unicron Trilogy Decepticon, see Slugslinger (Energon).

If you ask Slugslinger to describe himself, he'll tell you all about how he'll never turn down a chance to duel anyone, because he knows he'll always win. That is, assuming his Nebulan partner, Caliburst, still has some ammo left for Slugslinger to use to gun down his opponent from a distance. Take that away, and suddenly he's not such a tough guy after all. 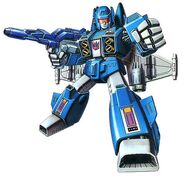 Slugslinger was under the command of Scourge and Cyclonus when they attacked Autobot City as part of a division while the Decepticon Clones stole the Key to the Plasma Energy Chamber. After Scourge successfully activated the chamber on Cybertron (and inadvertently sent a shuttle full of Autobots and the key halfway across the galaxy), Slugslinger attempted to restrain Galvatron's anger towards the prone Scourge. When he arrived on the distant world of Nebulos, Slugslinger defiantly shouted about leaping into battle...though the actual "leaping" was delayed because Triggerhappy kept standing in front of him. However, he did extol Trigger's battle cries. Lucky Autobots. He'll get them next time. The Rebirth, Part 1

Despite the Decepticons managing to capture several Autobots, when their friends arrived with their new-fangled Headmaster technology, the Decepticons had their asses handed to them. Slugslinger got a lucky break, being a jet, when the Decepticons met up with the Hive: Cyclonus didn't offer their new partners his head. Instead, he was partnered with Caliburst, a Hive member who was equally inept at warfare. The Rebirth, Part 2

Slugslinger and the other Targetmasters returned to Cybertron just in the nick of time to save Galvatron from the remainder of the Autobot forces. The Rebirth, Part 3

Slugslinger and his partners, Misfire and Triggerhappy, were frequent opponents of the Autobot trio under Pointblank's command. Engaged in combat over several space-faring denizens of planet Master, they were all caught off-guard by a massive explosion. Slugslinger and his partners and foes alike were transformed into Targetmasters, somehow fused together in pairs with each of the smaller Master Transformers by the explosion. Miraculous Warriors, Targetmasters (Part 1), Miraculous Warriors, Targetmasters (Part 2), The Master Sword Is in Danger!!, The Zarak Shield Turns the Tide, Operation: Destroy the Destrons, Duel on the Asteroid, The Final Showdown on Earth (Part 2)

Slugslinger was one of the Decepticons working for Scorponok back on Cybertron, rounding up Autobots for the Smelting pool. Their greatest rivals were the Autobots led by Fortress Maximus, and so they were more than a little perturbed when their favorite sparring partners vanished into the night. A foolish interstellar phone call from Zarak, though, led the Decepticons to them on Nebulos. They quickly took Zarak and his people hostage and began laying waste to the planet. They were initially rebuffed by a new group of Autobot Headmasters, but Scorponok managed to replicate the procedure and apply it to his own men. He didn't make Slugslinger a Headmaster but, for some reason, when he was choosing warriors who might need a boost of confidence from becoming a super-charged, gun-slinging Targetmaster, Scorponok did think of him. Slugslinger was binary-bonded to the Nebulan Caliburst shortly before the Decepticons left Nebulos behind, chasing the Autobots of the Steelhaven towards Earth. Brothers in Armor!!

Slugslinger remained on call with Scorponok's forces after they arrived on Earth, but rarely participated in any active missions. He did battle with a group of Autobot fliers during the Underbase Saga and won (though he only did so while accompanied by the ever-terrifying Buzzsaw and several other Decepticons). Dark Star! Slugslinger also stood up to Scorponok with his fellow Decepticons to challenge Starscream's place in the army.

Slugslinger was a member of Starscream's Predacon faction by the end of the Dark Ages. He participated in the attack on the peace treaty at Tyger Pax along with the other Predacons, but was quickly overrun by the combined Autobots, Decepticons and Ultracons who survived their first bombing run. The Age of Wrath, Part 1

Back before the war, Slugslinger appeared among the crowd in the Forge watching Megatron's first pit fight against Cy-Kill. Megatron Origin, Part 2

Generation One Slugslinger is a cybertronic twin-cockpit space fighter with possibly the most conservative colour scheme of the Targetmaster Transformers, being predominantly grey. His Targetmaster partner Caliburst attaches to a peg hole on the dorsal hull behind the cockpits.

As typical with some of the larger 1987 Transformers toys, Slugslinger has a well-proportioned robot mode body that is seemingly designed to better match the style of the Generation One cartoon animation models, at least compared to Transformers designed during the Diaclone era and the 1986 Movie toys. He has decent articulation with shoulder and elbow joints, as well as hip and knee joints (though the latter is mainly to facilitate his transformation sequence). Caliburst transforms into a small guy in robot suit/little robot dude, depending on where you live, or can be left in gun mode to be held by Slugslinger.