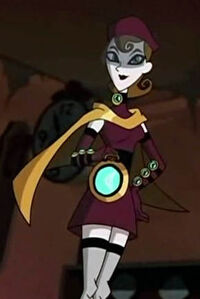 Slo-Mo is a human from the Transformers Animated continuity family.

Working a nine-to-five job as a wage slave sure sucks. Which means that when you discover a fragment of an ancient life-giving alien artifact. it's time to clock out for the last time and launch a career as a super-villain! No? Well Slo-Mo seems to think so.

Slo-Mo first appeared on the scene as a mysterious benefactor who helped out several of Detroit's B-List Villains, saving them from capture by the Autobots with an Allspark-empowered timepiece. Gathering these three 'also-rans' at her former place of employment she introduced herself. Formerly a carbon blob from Sector 7G a production line worker, she one day discovered what would prove to be an Allspark fragment mixed into the quartz crystals she fitted into clocks.

Retrieved from "https://transformers.fandom.com/wiki/Slo-Mo?oldid=192769"
Community content is available under CC-BY-SA unless otherwise noted.