Teletraan I: The Transformers Wiki
Register
Don't have an account?
Sign In
Advertisement
in: Dinobots, Age of Extinction Autobots, Autobots, Knights

View source
This article is about the Movie Dinobot. For the Kre-O Dinobot, see Slash (Kre-O).

Slash is a Dinobot who transforms into a Raptor. He does not appear in Transformers: Age of Extinction along with Snarl and Slog.

"There's no situation Dinobot Slash can't escape. He can carve an opening and slip out undetected, or battle his way out with his razor-sharp claws! Convert, arm and attack with all the Transformers action you can handle! This Dinobot Slash figure is a high-powered fighter whether he's in robot mode or raptor mode. With a scimitar in each hand, he'll be a match for any enemy in robot mode. And when he converts to vicious raptor mode, no enemy can hope to deal with his razor-sharp claws! Keep converting him back and forth so he can handle whatever his foes dish out!" 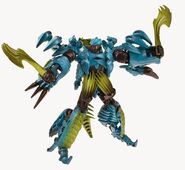