Undead (trapped in the shadowzone)
Possibly Destroyed after Predacons Rising

Masters and Students (alive)
Shadowzone (as a Terrorcon in the Shadowzone)

"Optimus Prime! I haven't seen you since the Battle of Technahar. Megatron ordered me to annihilate you."

Skyquake was the split spark of his brother Dreadwing. Skyquake was sent to Earth to guard Energon deposits. Years later he was awoken by Starscream but was soon killed by Bumblebee. Skyquake was resurrected by Starscream as a Terrorcon but ended up getting trapped in another Dimension after a Ground Bridge failure and lost his right arm in the process. Terrorcon Skyquake is possibly destroyed when Unicron is trapped in the Allspark's container by Optimus Prime in Predacons Rising, or by Soundwave (when he is trapped in the Shadowzone too).

Skyquake and his twin brother Dreadwing were brought to life from two half's of the same lifeforce by the AllSpark, allowing each other to sense each other across the galaxy.

Skyquake took part in the Battle of Technar were he was ordered to destroy Optimus Prime but failed. However Skyquake would not forget the order and would carry it out once more later.

Skyquake was presumably on the Nemesis that brought the Decepticons to Earth (whether it was before or after the space bridge accident that involved the Ark is unknown). He was then sealed inside a stasis pod, waiting for the day that he would be reawakened and serve Megatron once again.

Years later after Megatron's recent demise, Starscream sought to have a strong presence to enforce his rule so he sought out Skyquake. However upon reawakening him, he still vowed his loyalty to Megatron. As the two came closer to blows, Optimus Prime showed up asking them to stop the war but Skyquake remembered his order to kill Prime and pushed Starscream out of the way before attacking Prime. As they engaged, Bumblebee got involved too. The three continued to fight but Skyquake had not taken a vehicle mode since awakening from stasis and was therefore unable to transform. Optimus and Bumblebee lead Skyquake into a ditch and jumped him. Skyquake tried to escape but was unable to... until Agent Fowler's jet arrived which Skyquake was able to scan to get an advantage in the air. Skyquake fought Optimus, Bumblebee and Fowler for a while until Bumblebee jumped on Skyquake and ripped out his circuits and made him crash, killing the Decepticon. Optimus and Bumblebee then buried his body.

Sometime later Starscream returned to the battle site and used a chunk of Dark Energon to resurrect Skyquake as an undead Terrorcon. Though he was able to complete his mission, A Ground Bridge failure sent Skyquake and Team Prime's three human friends Jack, Miko and Raf into an alternate dimension, able to see everything in the real world but unable to touch it. Skyquake then began to chase the human kids instead and lost a right arm to them when they used Starscream's right arm missile, which was also trapped. However, Skyquake's arm gained its own life and chased after the kids as well. The kids managed to escape the demension as well as Skyquake's arm which attacked Starscream but the rest of Skyquake was left trapped in the alternate dimension. Skyquake found Starscream's right arm and tried to use it a replacement for his own loss limb but when it did not fit, Skquake simply tossed it away and walked on.

"My twin and I share split spark. A metal but two halves of the same life force. Even across the galaxy I sensed when he emerged from stasis on this planet, and when his spark was no more..."

―Dreadwing about his brother Skyquake.

Skyquake never referred to Dreadwing in Masters and Students. However, Dreadwing revealed that he and Skyquake are twin brothers due to both of them sharing a split spark, which he also revealed that he was able to sense when Skyquake was on Earth and when his spark was extinguished. Despite Skyquake being killed and not being able to share his feelings towards his brother, Dreadwing seemed to have a strong connection with his brother and would not hesitate to avenge him from a certain desecrator.

"You fail to grasp my meaning. I am here on a mission, assigned to me by my one master, Megatron."

―Skyquake to Starscream about Megatron. [src]

Skyquake is shown to be extremely loyal to Megatron. Megatron ordered Skyquake to kill Optimus Prime, but failed, but did not give up on trying. Skyquake was quite shocked when he learned Megatron had seemingly died.

Skyquake and his twin look identical as they are twins, but Skyquake has army green arms, with pale green fins on the bottom. His wings are the same color as the fins. His head ornamentation resembles that of a samurai warrior. His face and hands are grey and his jet-modes cockpit is a golden or orange color and sticks out from his chest. He has red eyes. He has two dark orange horns sticking out from both sides of his head. The fins on his shoulders have a dark orange lining as does his wings, and the 'cuff' pieces on his arms are dark orange.

According to Optimus, Skyquake valued honor and loyalty, much like his twin Dreadwing. However, his twin did a significantly better job at keeping his temper in check, though he was willing to kill Starscream to avenge Skyquake. Such shows as to Skyquake's constant rages and anger issues which made him a very reckless fighter. Despite his angry side, Skyquake was a very loyal soldier and one of the most loyal that Megatron had ever had. He was also very brave.

Skyquake has proven to be a formidable opponent in combat, showing to have been able to go toe-to-toe with the likes of Optimus Prime, a battle-hardened veteran with ease. He had enormous strength and could throw an opponent into the air. Skyquake was armed with a large Energon/plasma machine gun.

Skyquake's rage was his greatest weakness and he was not able to control it at all. 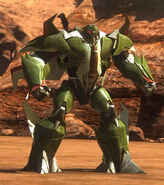 Retrieved from "https://transformers.fandom.com/wiki/Skyquake_TFP?oldid=458034"
Community content is available under CC-BY-SA unless otherwise noted.