Teletraan I: The Transformers Wiki
Register
Don't have an account?
Sign In
Advertisement
in: Cybertronian, Predacons, Characters,
and 7 more

Skylynx is a Predacon and former member of the Decepticons. Skylynx was created, with his fellow Predacon named Darksteel by Shockwave and Starscream in an attempt to re-create Project Predacon and build a new Decepticon army. However Skylynx and Darksteel soon found themselves falling under their true leader Predaking. Together, they fought alongside the Autobots, and Knock Out, against Unicron.

Like Hardshell, Skylynx came closer to killing an Autobot than anyone in the series when he almost killed Ultra Magnus, since Starscream killed Cliffjumper and Megatron killed Bumblebee for a few moments. Skylynx was very intelligent and will not hesitate to finish his work. He was also very boastful of his abilities which proves when he took down Ultra Magnus, a veteran soldier of the Great War.

Like with the other Predacons in the series Skylynx existed at least once before, the original Skylynx who was killed during the Great Cataclysm.

Shortly after Starscream and Shockwave arrived on Cybertron after Megatron's death, Shockwave immedtiately re-initated Project: Predacon and created Skylynx and Darksteel. Skylynx and Darksteel were then sent to find more bones of their fellow kind. On a search mission he and Darksteel were discovered by Ultra Magnus and Smokescreen. Skylynx immediately leaped to attack Magnus while Darksteel took on Smokescreen. Skylynx however proved far capable to take on Magnus and smacked him down and badly wounding him but was prevented from killing him when Smokescreen interviened and dragged him through a GroundBridge portal.

Sometime later they returned to Shockwave's lab where they bragged about their victory and how weak the Autobots were, Starscream hit them with an electric rod saying they shouldn't have been found by the Autobots. But Skylynx stood up for them both stating that they weren't followed and had no reason to fear the Autobots.

Sometime Skylynx and Darksteel found an entire burial site were thousands of deceased Predacon bones were. The Predacons, Shockwave and Starscream then got to work in digging them up.

During the digging, however, Skylynx and Darksteel got into a minor scuffle when Darksteel accidentally hit Skylynx with a bone, before Unicron had arrived. However Skylynx and Darksteel's first instinct was to attack him head on but both of them failed miserably as Unicron turned the ancient Predacons into Terrorcons. Not long after Skylynx watched as Unicron's army of Terrorcons headed off for the Well of the Allspark, trampeling Shockwave in the process, he then witnessed Predaking arrive not long after.

Predaking was shocked to see what happened to the burial site and realised that Unicron must have been involved but Skylynx told him to be happy that it wasn't him being possessed but Predaking was set on returning the remains to their resting place.Predaking told Skylynx to join him, but he and Darksteel initially refused and attacked Predaking instead. Although for a short time they had the upper hand against Predaking. However, Predaking managed to pin them down and they surrendered to his command, which Skylynx replied "All Hail Predaking." Shockwave, who somehow survived, suggested that they use their strength against the Terrorcons instead.

At the arrival of the Nemesis, Skylynx and the other two Predacons battled with all the Terrorcons flying in the sky. The Nemesis crashed during the battle and the Autobots went outside. Skylynx landed alongside Predaking and Darksteel to fight alongside the Autobots, he attacked the oncoming Terrorcons along with Predaking and Darksteel. At first the Predacons gained had the upper hand, but the Terrorcons outnumbered them and forced them all the way down to the core of Cybertron. At the moment Unicron was defeated by Optimus Prime, all the Terrorcons turned to dust and the Predacons were saved from being destroyed in the core. Later on when Starscream planned to claim Darkmount, Skylynx joined his fellow Predacons in settling some old scores with Starscream.

In Mini-Con Madness, Starscream had explained to Bumblebee about how the latter survived from the Predacons at Darkmount. Starscream was chased by Darksteel and Skylynx deep within Darkmount, where Starscream accidentally turned on a stash of weapons that Megatron stored against the Predacons. As a result, Skylynx and Darksteel were destroyed by the fortress' internal defenses.

Skylynx is a bitter and sour guy in comparison to his chuckle-head partner, Darksteel. While he may be the type of guy to throw a punchline once in a while, Skylynx conducts a very stark delivery. Despite his horridly dull personality, he's quite fierce enough to handle himself in a battle, and is just ever so arrogant enough to color himself and the Predacons above any and all Autobots and Decepticons and as with Predaking his arrogance is well founded. He is very skilled in combat and can take an opponent with ease. He also appears to be very intelligent, as he was shown to examine his surroundings. To an extent, he also appears to dislike Darksteel's laughter at times, as it was revealed in Predacons Rising where Darksteel accidentally hits Skylynx with a Predacon bone. Skylynx asked Darksteel if he find him amusing and proceeded to hit his companion with the same bone and the two began to tussle over it. However, Skylynx appears to respect his Predacon brethren, Predaking and Darksteel. He also took part in the alliance with the Autobots and Knock Out in fighting against Unicron. Skylynx has the same predatory ferocity that all Predacons have, as shown when he and Darksteel attacked Ultra Magnus, and Smokescreen, and later when they attacked Unicron. He lacks the arrogance of Predaking like Darksteel.

As a Predacon, Skylynx possess the greatest physical prowess of any Cybertronian like Predaking and Darksteel. Though attacking him from behind, Skylynx was eventually able to severely injure Ultra Magnus and would have terminated him if not for Smokescreen intervening. He stood Darksteel’s equal and brother, however, could not defeat Predaking alone.

Skylynx's chest and wing membranes are light blue. His upper arms, the front part of his forearms and his thighs are dark blue. The back part of his forearms are red, as are his ankles and hands. His head is consists of three spikes formed like his Beast Mode if it’s mouth is open. While in Robot Mode he is the tallest of all the three recreated Predacon clones. And the horns of his beast mode which sprout from his back are red as well. His eyes are yellow. Skylynx’s wings fold closely together.

His beast mode is that of a dragon with four legs and two wings. He looks more like a classical dragon. In his beast mode his neck and tail are light blue on the underside but white on the topside and the other parts of him are the same color as they are in his robot mode. And he has ten teeth on the upper jaw and none on lower jaw. The fifth tooth on the upper jaw is larger than the others and curves forward. Compared to his Predacon brethren, his Beast Mode Skylynx has a very short wingspan, which is tethered and makes it realistically improbable for him to take flight.

"I am not your boss. I am your KING!!!"
― Predaking to Skylynx and Darksteel.

Skylynx and Darksteel met up with Predaking when he arrived at the Predacon grave yard. The trio were surprised that their ancient ancestors were alive and desecrated by Unicron who was inside Megatron's body. Skylynx advised Predaking that he should be glad to be alive so that the "demon" doesn't pull his strings. Predaking tried to recruit Sklynx and Darksteel into fighting Unicron, but Predaking had to fight them. After a short fight, Skylynx and Darksteel fell under Predaking's command and Skylynx stated "all hail Predaking". They help the Autobots in defeating Unicron's army but they were taken by their Predacon ancestor zombies into the core of Cybertron. After Optimus trapped Unicron's anit spark in the AllSpark's vessel, Predaking, Skylynx and Darksteel flew over the core of Cybertron as their Predacon ancestors were destroyed. The trio went after Starscream in Darkmount where they seek some vengeance on him.

"So you find me amusing?"
―Skylynx to Darksteel after Darksteel accidentally hits Skylynx with a Predacon bone.

Skylynx was created along with Darksteel by Shockwave and with the aid of Starscream. Skylynx seems to be quite fond of Darksteel and he is seen to hang out with Darksteel throughout the TV movie Predacons Rising. During their gathering of Predacon bones in the Predacon graveyard, Darksteel accidentally hits Skylynx with a Predacon bone and laughs about it. Sklynx asks Darksteel if he found him amusing and Skylynx hits Darksteel with the exact Predacon bone. They were close to fighting each other with the bone until Starscream stopped them. After Unicron, who was inside Megatron's body, resurrected the Predacon remains, Skylynx and Darksteel were shocked by the whole thing. Suddenly, Predaking arrived and he tried to get them to join him. They refused and fought Predaking in beast mode and in robot mode. Predaking won the fight and they follow under his command. After Optimus Prime defeated Unicron, the three Predacons went after Starscream in Darkmount to seek some revenge.

Smokescreen and Ultra Magnus battled Skylynx and Darksteel in Predacons Rising. Skylynx was punched by Ultra Magnus but he was able to overpower Magnus. Smokescreen was able to save Magnus just in time before Skylynx could kill him. Later when Unicron was using an undead Predacon army to destroy Cybertron, Skylynx and Darksteel teamed up with Team Prime and Predaking to save their home. After they defeated Unicron, with the aid of Optimus Prime, Skylynx may have stayed as an ally to Team Prime.

Shockwave is Sklynx's creator. While they have little interaction in Predacons Rising, Shockwave seems to treat Skylynx with respect. Shockwave even convinced Skylynx, Darksteel and Predaking to aid the Autobots in fighting against Unicron's army of undead Predacons.

Skylynx fought Unicron and was temporarily defeated by him in Predacons Rising. Skylynx fought alongside the Autobots, Predaking and Darksteel in defeating Unicron's army.

The one on the left 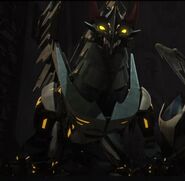 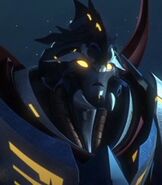