Skunkticons are a gang of Decepticon hoodlums led by Malodor. They have the ability to spray a liquid toxin which disorients the target's sensors, plunging them into a state of confusion. Their toxin does fade from the victim and they would return to normal after some time. Their team name comes from their species name.

The Skunkticons were prisoners aboard the Alchemor when it crashed on Earth, spilling their stasis pods out. They eventually reactivated, violently ripped themselves out of their stasis pods and headed for the Crown River Dam where they encountered Bumblebee and his team. After they incapacitated the Autobots with their spray, Malodor opted to take Grimlock hostage. This did not last long as Grimlock woke up from his confusion and Malodor squared off against Bumblebee while Sideswipe and Strongarm took on Malodor's men. It wasn't until Grimlock managed to damage the dam control, which resulted with the Autobots getting sprayed once again and the Skunkticons managing to escape down a service tunnel. However, the Autobots recovered from the toxin and managed to catch up with them by taking a parallel tunnel and the quartet were captured.

Later the Bee Team encountered a lone Skunkticon, Zorillor, who had somehow acquired the Sphere of Doradus and regarded it as his "pal". He successfully hit Strongarm and Drift with his spray, but the latter proved a capable combatant regardless, driving Zorillor to flee, but Slipstream and Jetstorm were able to successfully capture him when his spray ran out.

Skunkticons aren't very strong or very fast, but they make up for that with a possibly foul smelling spray that disrupts a Cybertronians senses of hearing, and vision. This allows them the time they need to escape, much like Earth skunks use their spray. 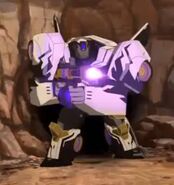 Add a photo to this gallery
Retrieved from "https://transformers.fandom.com/wiki/Skunkticons?oldid=456425"
Community content is available under CC-BY-SA unless otherwise noted.