Teletraan I: The Transformers Wiki
Register
Don't have an account?
Sign In
Advertisement
in: Dark of the Moon Autobots, Human Alliance, Revenge of the Fallen Autobots, N.E.S.T.

View source
The name or term Skids refers to more than one character or idea. For a list of other meanings, see Skids (disambiguation).

Skids is one of the Twins. Skids claims he's smarter than his brother Mudflap and seems to believe he's more mature, though in claiming so, he has a tendency to blabber on and on and on... He has an oversized right arm and an oversized right eye. He also has a tendency for starting fights with his brother. Both he and Mudflap started out disguised as an ice cream truck, both merged as one half of the truck, Skids as the front, and Mudflap as the back.

"Any Decepticons out there better get ready for an butt-whooping."
―Skids[[Revenge of the Fallen| [src]]]

Skids, who originally transforms into the front half of an ice cream truck, fails to capture Sideways in Shanghai, China. When he and Mudflap return to the N.E.S.T. base on Diego Garcia, they scan two Chevrolet concept cars for their new modes. Skids takes the green one after knocking Mudflap off it; Mudflap ends up taking the form of the red one.

They and Bumblebee go to rescue Sam Witwicky from Megatron and Starscream. Mudflap and Skids then accompany Wheelie, Sam Witwicky and friends and in their search for the ancient Seeker Jetfire and is teleported with them to Egypt through Jetfire's space bridge. He and Mudflap also get extremely annoyed by Leo, wanting to kill him and referring to him as a pussy and his hair growing like a chia-pet.

Finding themselves at a dead end and when Mudflap questions Sam's usefulness, Skids defends Sam, reminding Mudflap that Sam killed Megatron. This quickly evolves into a brawl that unintentionally causes the brothers to find the Tomb of the Primes before Bumblebee tosses them out, causing Skids to comment how rude it was.

"Prepare to be driven like never before, by the Maestro."
―Simmons, about to drive Skids.

The twins then accompany Seymour Simmons and Leo Spitz into devising a plan to destroy the Solar Harvester. They encounter Devastator, in which Mudflap is sucked in by Devastator's vortex grinder, leaving Skids devastated, proclaiming that he "got so ate". When Mudflap breaks out of Devastator, he and Mudflap whale on the giant before Mudflap accidentally shoots Skids in the face, knocking his gold tooth out. Skids and Mudflap aren't seen after that, but presumably survive as Devestator ignores them, climbs the pyramid and is destroyed by a railgun strike ordered by Simmons. Transformers: Revenge of the Fallen

IDW/Dark of the Moon film

Skids and Mudflap were originally scripted to feature in Dark of the Moon, but their appearances were cut from the finished film, save for this very brief shot.

Skids and Mudflap were attacked by Ransack on Interstate I-90. He forces them onto a muddy field. When Ransack came around for another strike, Mudflap threw mud in his engine, making him lose control for a second. When he came round to attack again, he lose off his machine guns, causing Skids to fall. Ransack transformed to finish them off. Just as he landed, Bumblebee arrived after he received an S.O.S from the Twins. He launched missiles at Ransack, badly damaging him and making him retreat with smoke trailing from his engine.

While the Twins were training on Phobos, a moon of Mars, Soundwave, Grindor and Sideways arrived and force them to look for Ransack. They left and headed for Earth. Later, they searched for Ransack at an old barn. Just as they were gonna leave, Ransack bursted out of the barn and took off. He swung around and attacked the Autobots. Skids and Mudflap tried to escape and Ransack pursuited them. Then, Grindor and Sideways arrived. Grindor blasted out Ransack's wings, causing him to crash before Sideways attacked Mudflap. Mudflap managed to ram Sideways into a tree, disabling him. Grindor found the crashed Ransack and towed him away.

Back on Phobos, Soundwave interrogated Ransack. Just as Soundwave was going to assassinate Ransack, Skids and Mudflap attacked. Taking advantage of the attack, Ransack mades his escape. He blasted Starscream in the back, dodging Soundwave's missiles, and bursted out of the training complex and into space. As he did, he told all: "No second chances. When The Fallen hears about thisTemplate:M— There'll be no place in this whole universe you can hide!" After that, he is never seen again. Skids and Mudflap probably got away or Autobot reinforcements came.

Skids transforms into a neon-green Chevy Beat. Like the movie, he has a deformed right arm with an oversized right eye, as Mudflap has an oversized left arm and eye. The oversized arm has a punching gimmick. His mech-alive gimmick is activated when you push the Chevy logo in robot mode. This will make his chest armor move and bob his head up and down. One of the more annoyingly difficult Deluxe figures to transform...along with his brother.

Skids, along with his twin brother Mudflap, combines into a pink and white ice cream truck. Skid's half is about the size of a scout class, and Mudflap is slightly larger but, forming a Deluxe-sized vehicle, are considered as part of that class. Skids turns into the front half of the truck. For obvious reasons, the toy does not bear the phrase "Decepticons, suck my popsicle!" 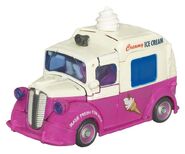 "Suck my popsicle" and bad singing not included.

This Voyager sized version of Skids comes with an Arcee figure which oddly enough looks more like Chromia. This new version has a more detailed transformation than the Deluxe version. He sticks with the head-gimmick of the Deluxe toy; Pressing a button on his head causes his mouth to look as if he's talking. He comes with a Mikaela Banes action figure, which, like the other two Human Alliance humans, is under-scaled to the toy that she is paired with.

Part of the Hunt for the Decepticons line, he gets a tuner update, just like Mudflap, by adding more solid black to his look.

This Skids is a repaint of the previous Revenge of the Fallen Legends mold with new black and green color scheme.

This is an entirely new, simpler, Deluxe class mold for the Dark of the Moon toyline. As with the previous figure, he transforms into a Chevy Spark, this time with a primarily black paint-job with two green stripes running the length of the body.

He humanoid mode, he is very short, but quite bulky. The overall look of the figure is offset due to the fact he has huge feet, and because of these huge feet he has no knee articulation, a rare occurrence in modern Deluxe class figures.

This is a strait up repaint of the Revenge of the Fallen figure, packaged with Elita-1, a repaint of the previous Arcee figure and Tech Sergeant Epps. 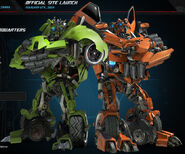 And the winner of "Cybertron's Ugliest" competition is..... 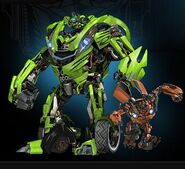