Teletraan I: The Transformers Wiki
Register
Don't have an account?
Sign In
Advertisement
in: Autobots, Generation 1 characters

Six-Gun is an Autobot from the Generation One continuity family.

The name Six-Gun isn't just metaphoric; this Autobot soldier is literally a walking, talking mass of weaponry. Six-Gun is one of Metroplex's autonomous troops, and is composed of six of the city-bot's guns. Along with Scamper and Slammer, he helps patrol and defend Metroplex's interior and periphery. Like his partners, he is mentally linked to Metroplex, and shares a similar personality. Perhaps befitting a living artillery battery, Six-Gun tends to be a bit more blustery and belligerent than his teammates. 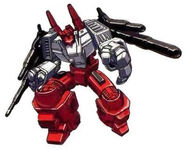 Six-Gun was part of Metroplex's investigation into the disappearance of Fort Knox after 'dinosaur transform static' was found at the scene of the crime. When Sky Lynx objected to being grouped together with the Dinobots, Six-Gun pointed out that he had dinosaur electrons inside of him. However, Perceptor revealed that the Energon cubes found at Fort Knox were made of a Decepticon formula, and Six-Gun realized that Trypticon must have been the real culprit. Thief in the Night.

Six-Gun was later recolored into Metroshot.