Teletraan I: The Transformers Wiki
Register
Don't have an account?
Sign In
Advertisement
in: Character stubs, Dark of the Moon Autobots, Movie Autobots,
and 2 more
English

View source
The name or term Sideswipe refers to more than one character or idea. For a list of other meanings, see Sideswipe (disambiguation).

Sideswipe was born with battle instincts and swords already at hand. His swords are also detachable so he can throw them at enemies if needed. He is sleek, fast, focused, and accomplished in battle. Focusing on his enemies with absolute attention, his blades are a shining blur as he leaps through the air, twisting to avoid enemy fire. He also has dual blasters that unfold out of his forearms and blasters on his back, which happen to be the exhaust pipes when he is in car mode. Converting to his vehicle mode which is a Gray/Silver Corvette to drive at blazing speeds, he uses every trick in the book to get close to his opponent, and put his powerful swords and blasters to work hacking, tearing, and firing at them.

One of the Autobots who can be unlocked for multiplayer mode by completing the game, Sideswipe transforms into a red Lamborghini Murcielago Roadster.

Revenge of the Fallen: The Game

Damn, I'm downloadable! You're not as cool as me!

Note: He is a part of the downloadable pack for summer 2009 August on Xbox 360 and Play Station 3. He is also a playable character in the PSP version and the Autobot Nintendo DS version, which is during Challenge Modes only.

Dark of the Moon: The Game

Sideswipe is never playable during the campaign, but he does appear a few times. He is at the end of Chapter 1, when he helps Optimus Prime and Bumblebee defeat a giant Decepticon attack. He also appears in chapter 3, in which he helps fight Starscream alongside Bumblebee and Mirage. Sideswipe is also available as DLC to play as in the game's multiplayer. 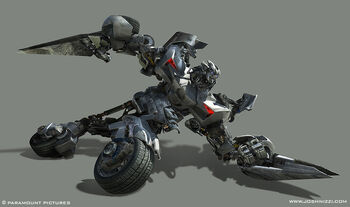 In Shanghai, Sideswipe is sent out to finish Sideways. Sideswipe yells "Clear a path!" to the soldiers standing around, chases Sideways around some warehouses and then uses his left sword to propel himself up into the air over Sideways, fires his back-mounted guns and launches his right sword into Sideway's hood. Then he lands on the ground, twirls around, reattaches his blade, and pulls it through to finish off Sideways. Then he triumphantly twirls around and states, "Damn, I'm good!"

After Optimus Prime was killed in combat against Megatron, Starscream, and Grindor, Sideswipe and the other Autobots arrive to help, but all they could do was provide cover fire as the humans and Bumblebee sped away. Afterwards, when Optimus Prime's body was brought to the N.E.S.T. base, Sideswipe and the other Autobots ready their weapons in case the humans attacked. Galloway pointedly looked at Sideswipe when he was lecturing Major Lennox about the Autobots and their presence on Earth.

Later in Egypt, Sideswipe is on the lookout for Sam. He soon spots Sam and alerts the Autobots and soldiers. He is then shot and has to fire back. Even later, he is pushed to the ground along with all of the other Autobots when the Fallen teleports in to steal the Matrix of Leadership from Optimus Prime. Transformers: Revenge of the Fallen

Sideswipe assisted Bumblebee, Dino, and Que in taking over a power plant in the Middle East, a job that the government wanted to be done.

Later on, he, alongside Dino and Bumblebee, were escorting Sentinel Prime back to N.E.S.T. headquarters when the Dreads attacked them. He fired a volley of missiles that knocked Hatchet off balance so Dino could finish him off. He was then shown to flip over cars that Crankcase and Crowbar threw in the Autobots' path, before following Dino into the streets of Washington without Bumblebee.

Once back in the city, he shouted to Dino that he would take on the two remaining Dreads and fires his blaster at them. The shot (which was an explosive round.) did not stop the Dreads and they continue to drive at Sideswipe until Ironhide rammed them head-on. Sideswipe then participated in the "Mexican standoff" between Ironhide and the Dreads. He tells the Dreads that if they drop their weapons, the Autobots will let them escape with their dignity. But after all four combatants drop their weapons, the Dreads activate spiked spear-like weapons from their backs. Sideswipe shouts a warning to Ironhide and leaps into the air slicing one of the spears (this one thrown by Crankcase) into two pieces, he is able to kick one of his dropped blasters to Ironhide, who then uses it to blow off Crowbar's face. Sideswipe then slices at Crankcase before he is kicked away, but this distraction allowed Ironhide to attack the dread and ultimately kill him.

Later on, when Sentinel Prime kills Ironhide and betrays the Autobots, Sideswipe takes cover with the other Autobots, unable to challenge Sentinel.

Sideswipe, alongside the other Autobots, leave Earth in the Xantium, which is destroyed by Starscream. However, it is revealed that the Autobots hid in a booster rocket that separated from the shuttle before it was blown up.

Sideswipe participates in the final battle at Chicago, where he is captured by Soundwave, Barricade, and other Decepticons alongside Bumblebee, Ratchet, Dino, and Que. However, thanks to a distraction by Wheelie and Brains, Sideswipe and the others are able to escape.

Sideswipe later assists Bumblebee and Ratchet in firing at oncoming Decepticons. He also teams up with them to fight Sentinel Prime, but gets slammed by Sentinel's arm and painfully knocked to the ground. He then is shot by Sentinel before the Prime is blasted by a soldier. Sideswipe still manages to survive the battle.

Sideswipe transforms from a teeny whittle Corvette Stingray Concept car into a itty bitty robot who pretends, through how he's molded, to retain his swords and wheel-feet. Isn't that just adorable? Now, if only he had a tiny Sideways to slice in half like a pizza...

This toy was later packaged with Legends class Mudflap and Decepticon Deluxe Fearswoop in a special Walmart exclusive 3 pack.

Sideswipe transforms into an amazingly accurate Chevy Corvette Stingray Concept. He has twin "deployable blades" on his arms which rotate around in robot mode. His Mech-Alive feature is a pair of shifting leg-mounted "battle armor" that lengthen when his lower legs are pulled back, and shorten when they're straightened. Speaking of his legs, his feet, being wheels, sometimes make him incredibly difficult to keep stood up. He has what can act as stoppers on the back of his feet, but they tend to serve no real purpose, since having him resting on them makes him fall backwards more often than not. The same thing happens if you try to use the plates on the front of his feet, but he falls forward instead. This standing issue can be helped by putting him in an "action pose", but having him stand up straight is pretty tricky. If by some Primus-gifted miracle you DO get him to stand relatively straight, the slightest breeze will probably knock him over. However, if you bend the "toe" (even if he does have wheel feet) forward all the way and bend the knees slightly, he will usually stand up. Foot problems notwithstanding, he has fairly good articulation in robot mode, about as much as is expected from a Deluxe Class figure. He also has a small Corvette symbol in his chest.

Sideswipe transforms to a cutified Chevy Stingray. his main gimmick is that he transforms automatically when the car is standing upright.But there is no artiulation

This incarnation of Sideswipe is larger and more movie-acurate than the Deluxe class toy. It features opening side doors and a detailed interior with two seats and a steering wheel. He is slightly less sleek in Robot Mode, with a movie-accurate head and Cybertonian markings. The blades are now sharp and aren't part of the car anymore, instead being stored on the underside of his Corvette Stingray Concept mode. Sideswipe comes with a Sergeant Epps figure, which can ride on his arm or shoulder during play and comes with a firing projectile and a cannon on its another shoulder

A movie accurate version of Sideswipe, with blue blades and little blocks on the wheels of his feet that allow him to stand. Most of these figures have poorly painted corvette symbols on their chests, and in come cases, the back lights of his car mode on his chest is reversed, making it look upside-down. It is made of a softer plastic and is based on the CGI incarnations of Sideswipe taken directly from the movie.

Along with Power Bots Bumblebee and Megatron, Sideswipe is a highly stylized, kid friendly version of himself. The lights and sounds can be used when the left shoulder is pushed.

A Redeco of his deluxe figure with new black patches on his vehicle mode and red translucent windows and it includes a global alliance sticker.

A brand new mold of Sideswipe that is part of the Hunt for the Decepticons line and comes with a pair of pistols but no swords, unfortunately. Though not his weapon of choice, he actually wields the guns once in Cyber Mission 7 to replace his swords (Shattered by Barricade in Cyber Mission 6.)

This is a new smaller mould of Sideswipe. He also turns into a convertible Chevy Stingray.

This a Walmart (Sainsbury's in the U.K) exclusive repaint of Sidearm Sideswipe. He is now blue and yellow with the number 04 on him. Also, he is now covered in sponsors that are references to other Transformers franchise, such as Axalon Rattraps, and "Maccadam's".

Part of the Toys R' Us exclusive Mission: Earth Scan series, this is a half clear, half solid colour re-deco of the Revenge of the Fallen Deluxe Sideswipe mould.

An all new Sideswipe mold for the Dark of the Moon franchise. Sideswipe now turns into a convertable Corvette Stingray. He is moulded out of a drab grey plastic that has been left bare except for grill details. The only silver paint on him is on his alloys, which are the wrong shape. Also, as he turns into a convertible, Hasbro has made the effort to add details. They have added seats and even a small steering wheel, this is surprising for a Deluxe class figure, especially one from the Dark of the Moon toy-line.

His humanoid mode is similar to his other incarnations except for a difference being that his chest is made up of the front of the car. His blades are now formed by only one part of each side of the car. He comes with a MechTech weapon, which is a blaster able to turn into a gun-blade.

The product shot shows the feet Transformers incorrectly, the bumper of the car should be at the back, and a small spur should be used as a foot, however, he is able to balance with out the toe.

Underneath Sideswipe's front bumper, there are two grooves corresponding with two notches on his arms. When you start transforming him, they line up and fit together, weather this was going to be part of a cancelled Stealth Force mode is unknown.

This mold was later retooled into Darksteel.