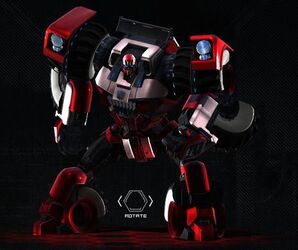 "Showdown does it first, he does it with style and keeps on doing it"

Showdown is an Autobot who served in the crew of the Arclight.

Although this veteran of the Kaon gladiatorial rings often ends up in the center of attention, Showdown is beloved by his teammates, and he's a 'bot with a big spark, literally. Showdown protects his fellow Autobots in combat and hits his enemies hard with impressive displays, no doubt influenced from his time as a fighter during the worst period of Cybertronian history.

Showdown was a gladiator in the pits of Kaon on Cybertron. Showdown was among the Autobots who were on board the Arclight when it was shot down over Central City. He survived the crash and proceeded to take part in a series of battles against the Decepticons who had come to Earth aboard the Leviathan.

Retrieved from "https://transformers.fandom.com/wiki/Showdown_(Prime)?oldid=456307"
Community content is available under CC-BY-SA unless otherwise noted.