Shifters are Cybertronians who are the descendants of Amalgamous Prime.

They are chameleonoid even by their race's standards, as they have the ability to take any form comparative to their normal size and mass, which even extends to other Cybertronians.

Their rare talents made them highly prized spies and scouts for the Autobots and Decepticons during and after the Great War. 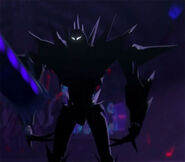 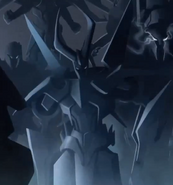 Amalgamous Prime, the ancestor of the Shifters.

Pseudo, another Decepticon Shifter.
Add a photo to this gallery

Retrieved from "https://transformers.fandom.com/wiki/Shifters?oldid=456160"
Community content is available under CC-BY-SA unless otherwise noted.