Shellshock is a Decepticon soldier.

Retirement was never truly in the cards for Shellshock. A soldier and a career killer, he has been holed up in his personal armory waiting for the day he would be called back into action against the Autobots, just so he can show them the devastating diversity of his customized weaponry.

It is rumored he collects the sparks of his defeated enemies. To some girls, that is an appealing trait.

Shellshock was part of the crew of the Leviathan when it shot down the Autobot ship Arclight over Central City. He and the other Decepticons on board went on to engage in a number of battles against the surviving Autobots in a number of places around the world. 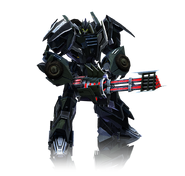 Add a photo to this gallery
Retrieved from "https://transformers.fandom.com/wiki/Shellshock?oldid=455006"
Community content is available under CC-BY-SA unless otherwise noted.