Start a Wiki
The name or term Seacon refers to more than one character or idea. For a list of other meanings, see Seacon (disambiguation).

The Seacons are a Decepticon subgroup in the Generation One continuity family.

The six Seacons are the Decepticons' undersea combat specialists. They all transform into mechanical beasts resembling (more or less) aquatic life forms from Earth. The six combine into the super warrior Piranacon (also spelt 'Pirranacon').

The team consists of:

The Seacons were summoned to Earth by Shockwave, who had them put their undersea abilities to use fortifying the Decepticons’ sub-aquatic island headquarters. Outfitted with Earth modes by Shockwave, the Seacons were going about their task when they met with their first challenge, which also proved to be one of their greatest – they were ordered to defend the island against the insane, time-travelling future Decepticon, Galvatron. The Seacons gave a good account of themselves, merging into Piranacon for extra power, but ultimately, the team was defeated by their stronger adversary, only for Galvatron to reveal that he had not planned an attack at all, merely wishing to talk. Now, however, he claimed that Shockwave had made an enemy of him – although it was all part of a plan to destabilise his leadership. Enemy Action! Seeking a weapon that could truly combat Galvaton, Shockwave sought out the former Decepticon leader, Megatron, who had been missing in action for some time. When what was believed to be his body (but was, in actuality, a clone of him) was located in the Thames river by entrepreneur Richard Branson, Overbite was dispatched with some of the Decepticon jets to bring the body to Shockwave. Snaptrap subsequently repaired the clone’s physical damage, and aided Shockwave in using the psycho probe to brainwash it into his service. Salvage

Following this, the Seacons departed Shockwave’s service and joined with Ratbat, the leader of the primary Earth-based Decepticon force. Ratbat had relocated the Decepticons’ island base to the Florida Keys, disguising it as a holiday resort named "Club Con" to allow the Seacons to search the seabed for a sunken pirate ship, the treasure chest of which contained two Autobot tapes, Grand Slam and Raindance. The recovery mission was successful, but the tapes were then stolen by the Autobot Blaster, and the holidaymakers on the island had their peace and quiet rudely interrupted as the Seacons erupted from the ocean and attacked, searching for Blaster. In the ensuing battle, Blaster sent the tapes back to the depths of the oceans, encouraging the Seacons to call off the attack and head after them. Club Con!

The tapes, it was revealed, were sent to Earth centuries ago to warn the Autobots there of the approaching threat posed by the Underbase, a massive space-born information storehouse that could convey infinite power. Unfortunately, it was the Decepticon, Starscream, who managed to attain the Underbase’s power, turning on Autobot and Decepticon alike and attempting to conquer Earth. The Seacons were part of the attempted defence of New York, striking at Starscream from the East River, but were all deactivated by the cosmically-powered villain. Dark Star!

Note: These stories do not fit into the normal Marvel continuity. See Earthforce for details.

A few years later, in the Earthforce era, Megatron found himself lacking in troops during Decepticon civil war. Seeking to acquire more warriors, he projected his mind back in time to Starscream's attack on New York, taking possession of Snaptrap in hopes of saving the Seacons from destruction so that they might serve him in the future. He was pursued by Prowl, who prevented his scheme. Flashback!

G.I. Joe vs. the Transformers

The Seacons were first released in the US in 1988. They have a lot of purple and bright blue on them.

Although it's still a "scramble city" style combiner, the Piranacon combination is different from most other combiner teams. Snaptrap becomes Piranacon's torso, but the smaller Seacons can become not only one of Piranacon's limbs, but also a hand weapon for the giant. It is for this reason that the five smaller toys also have a 'weapon' mode (essentially their sea-creature mode on a stand with a gun clicked on). This makes Piranacon not only a combiner, but a Targetmaster.

A proposed Wal-Mart Energon exclusive redeco of the Seacons would have been called the Piranhacons. The toys were not taken by Wal-Mart and eventually made their way to the Transformers Collectors' Club, who made the toys into their original characters. 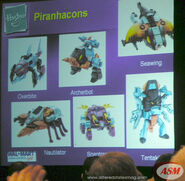 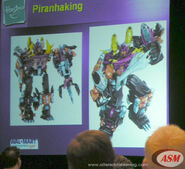 Tremble beneath my awsomeness!
Add a photo to this gallery

Retrieved from "https://transformers.fandom.com/wiki/Seacon_(G1)?oldid=372245"
Community content is available under CC-BY-SA unless otherwise noted.