The Buzz on Windblade

Scratch was one of the many Decepticons incarcerated aboard the prison ship Alchemor, and was freed after the ship crash-landed on Earth. He eventually ran into the Autobot Windblade, who was on a mission of her own. Although Scratch fought and blasted her with his claw-lasers, she was able to take him down by blasting him as Sideswipe watched. His unconscious body was secured inside a stasis pod alongside the other fugitives that the Bee Team had recaptured in the scrapyard. 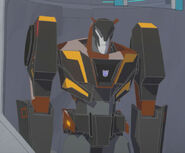 Add a photo to this gallery
Retrieved from "https://transformers.fandom.com/wiki/Scratch?oldid=481525"
Community content is available under CC-BY-SA unless otherwise noted.