Denny Clay's "Vintage Salvage Depot for the Discriminating Nostalgist", or the "Scrapyard" is a section of land outside of Crown City, also referred as scrapyard. It holds a vast collection of assorted junk that Denny sees as highly valuable. Lately it also contains the remains of a crashed Autobot prison ship and a number of stasis pods containing recaptured Decepticons. There are also a large number of defense systems, and barbed wire around the scrapyard, used to drive off intruders.

In Pilot (Part 1), Russell Clay comes to stay with his dad, who was moving things around in his scrapyard. Suddenly an Autobot space ship has crashed near the forest by the scrapyard. The ship scattered its cargo of Decepticons who were in their stasis pods all over Earth.

In Pilot (Part 2), Underbite devoured most things in the scrapyard and caught sight of Crown City from the scrapyard and left to go there. After Underbite was captured, the Autobots helped Fixit move pieces of Alchemor and some stasis pods into the scrapyard, which Denny welcomes them to use anytime.

In W.W.O.D.?, Sideswipe's antics while trying to annoy Strongarm resulted in the destruction of a number of vintage pinball machines.

In As the Kospego Commands!, a group of the Kospego's followers visited the scrapyard to purchase materials to construct a space bridge.

In Collect 'Em All, fellow collector Larry LaRue tried to feature Denny's scrapyard on a show he was working on, breaking in when Denny refused. Larry inadvertently obtained footage of Fixit and Denny was forced to sell him a bunch of stuff.

In True Colors, Fixit rigged up an alarm system for the scrapyard. Minitron gained access to the scrapyard by virtue of taking control of Grimlock, stealing Underbite's stasis pod in the process.

In Rumble in the Jungle, Fixit reorganized the scrapyard in retaliation for Denny trying to help with his work.

In Can You Dig It?, Ped attacked the scrapyard during Jazz's visit, stealing some of the Autobots' energon supply. They later lured him back there and successfully captured him in a stasis pod.

In Hunting Season, Fracture was able to snatch members of Bumblebee's team from the scrapyard. During the eventual showdown, Fracture's ship was crashed into the middle of the scrapyard.

In One of Our Mini-Cons Is Missing, Jetstorm's escape pod crashed in the scrapyard after he left Drift's employ, damaging a couple of the stasis pods and allowing Quillfire and Springload's escape.

In Deep Trouble, the scrapyard was flooded during an underwater GroundBridge incident, requiring extensive cleanup.

In The Trouble with Fixit, Unbeknownst to the other Autobots, Fixit had been adding hidden laser weapons to the scrapyard, which were activated when Denny accidentally reactivated Fixit's guard programming. 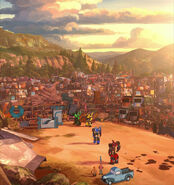 Add a photo to this gallery
Retrieved from "https://transformers.fandom.com/wiki/Scrapyard?oldid=449347"
Community content is available under CC-BY-SA unless otherwise noted.