Teletraan I: The Transformers Wiki
Register
Don't have an account?
Sign In
Advertisement
in: Species, Cybertronian, Transformers Prime,
and 4 more

"The most dangerous vermin ever to crawl upon the face of Cybertron."
―Ratchet on scraplets.

Scraplets are alleged to be the deadliest disease known to mechanical lifeforms in the entire galaxy. It is a complicated form of alien parasite, which lives solely to eat, reproduce, and eat some more.

Their sense of vision seems to be based on a combination of heat-seeking and metal-detection which is primarily geared towards identifying edible silicon-based life-forms. Carbon-based life-forms are all but invisible to the Scraplet, and usually of no interest.

The Scraplets were frozen in a large container in the Arctic. The Autobots, wishing to research the container, brought it into their base to thaw, only to have the Scraplets chew through their prison and escape. Raf, while investigating the base, discovered a Scraplet scuttling around, and thought it was some kind of Autobot pet. He decided to play catch with the creature and threw a bolt, which the Scraplet promptly devoured and promptly identified with Raf rather adorably, with behaviour not unlike a cat. Raf carried the Scraplet to the inner area of the base where Bumblebee, Bulkhead, and Ratchet were working. As soon as they saw the Scraplet, all three panicked, and tried to explain how dangerous it could be to them.

Raf thought it to be harmless, and that Ratchet was mistaken, until the Scraplet spotted the Autobots, leapt out of his arms and chewed large scratches into Bumblebee's leg. Raf smashed it, but Ratchet guessed that there would surely be more Scraplets around. His fear was confirmed when they found the empty container, and he sent Bulkhead, Miko, Raf, and Bumblebee to hunt them down while he tried to repair the Scraplets' damage with Jack watching his back. The Scraplets ambushed Bulkhead and Bumblebee and a swarm of them flew down from the ceiling and began chewing on Ratchet. Jack discovered that by using a fire extinguisher, one could freeze the Scraplets to death.

The creatures were initially fended off by the three children, who were not considered food by the Scraplets. The Scraplets had done considerable damage to many systems, and it was up to the children to fix them. They fixed the Energon supply cable that fed the GroundBridge, bringing it back online. The Autobots formulated a plan to both get rid of the Scraplets, and bring back Optimus and Arcee, who were stranded in the Arctic. Activating the now operational GroundBridge, Bulkhead decided to act as bait to draw the scraplets through. Once through, the scraplets darted at Optimus and Arcee, and became frozen before they could reach them. The massive damage they'd done to the base continued to plague the ground bridge's systems for some time.

There were still plenty of Scraplets on the dead Cybertron. A sizable cluster of them managed to find their way into the passageway beneath Kaon that led to Vector Sigma. When Jack passed through to Vector Sigma, the Scraplets followed him. While they had no interest in him, once the mega computer started charging the Key, the Scraplets started feasting on the empowered access board. Despite Jack's attempts to remove them, the Scraplets proved too many. Fortunately, an Insecticon had also followed Jack down the passageway, but stopped short when it saw the infestation of Scraplets, showing that it too was afraid of them. Jack quickly used this to his advantage by dislodging a live Scraplet and throwing it at the giant insect. Sensing a living Cybertronian, the scraplets quickly went to chew on the Insecticon. In a matter of seconds, the Scraplets chewed through the Decepticon sentry's limbs, causing it to fall over into the deep pit below. The scraplets followed the doomed Insecticon as it plummeted.

"They pick you apart from the inside out, going for the small, juicy bits first, fuse by fuse, circuit by circuit, until there's nothing left. And I mean nothing... not even your optics!"
―Bulkhead describing the Scraplets capabilities.

Scraplets are able to fly and are usually seen in large swarms. Their jaws contain dozens of spinning, rotating teeth that are able to chew through thick armor plating.

Due to their swarming mentality, Scraplets can be easily baited into traps and such. They are vulnerable to extreme subzero temperatures, which can freeze them almost instantly. They have no taste whatsoever for carbon-based life-forms, which means that humans can approach them without fear. 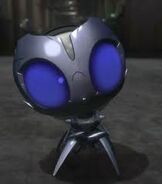 Many Scraplets.png
Scraplets are back to Arctic Area.png
Community content is available under CC-BY-SA unless otherwise noted.