Teletraan I: The Transformers Wiki
Register
Don't have an account?
Sign In
Advertisement
in: Dinobots, Decepticons, Cybertronian,
and 3 more

The Wrecker
The Smasher

"'I smash what I want, when I want and I ain't stopping for no 'bot'"
―Scowl to Grimlock in Similarly Different.

Scowl is a Dinobot gone bad. In a better world, Scowl could have put his prodigious strength and powerful hammer towards constructive ends. Instead, he turned his physical prowess toward random violence and indiscriminate destruction, with an emphasis on collateral damage. Scowl seems to revel in the destruction he causes, hiding his cruelty behind a gregarious facade and layers of self-rationalization. On Cybertron, Scowl worked for the crime boss Thunderhoof as one of his enforcers. Since he's arrived on Earth however, Scowl's chosen to strike out on his own and strike, and strike, and strike, until all of Crown City is a smoldering heap of rubble.

On Cybertron, Scowl worked for Thunderhoof's crime cabal as his hired muscle who took down buildings on the land that Thunderhoof had illicitly acquired. At some point, Scowl was arrested and incarcerated by Cybertron's police. Scowl was placed in a stasis pod aboard the prison ship Alchemor, but was freed after the ship crashed on Earth.

After laying low for some time, Scowl discovered a human demolition site, and eagerly began demolishing the abandoned stadium. He was discovered by another fellow Dinobot named Grimlock. The two Dinobots introduced themselves, talked, and bonded with one another over their mutual love of smashing stuff. Scowl invited Grimlock to help him destroy the stadium. Grimlock reluctantly agreed — since the stadium was going to be torn down anyway. After they destroyed the stadium, Grimlock told Scowl he was going to arrest him. Scowl managed to win Grimlock over and walk away free, promising to Grimlock that he would never endanger a human.

While wandering through the forest, the Autobots were confronted by Scowl. Scowl incapacitated Bumblebee and the others with a tree and angrily ran after, feeling betrayed by Grimlock. Although Grimlock tried to reason with him, the Decepticon escaped and headed toward a nearby rail station, hoping to knock down the elevated tracks and derail the approaching passenger train. The two Dinobots battled one another while the other Autobots tried to hold up the tracks. Grimlock gained the upper hand, and knocked Scowl into the station roof, sending him flying and temporarily taking him out of commission.

Unfortunately, Scowl managed to free himself before the Autobots could cuff him, and ploughed into a local spa, where he terrorized the humans that were there. The Autobots tried to hunt down Scowl without blowing their cover. In the showers, Scowl took out Drift and his two students, Slipstream, and Jetstorm. Scowl heard Grimlock say Scowl's line and immediately attacked him through a wall. Scowl then tried to bring down the ceiling on a group of meditating humans, only to be stopped by Grimlock. The two fought again in their dino modes and Scowl gained the upper hand. While on the floor, Grimlock had an apparent change of heart, and confessed that it's more fun to do whatever he wants instead of being told by some Autobot. Following his comment, Scowl was happy at Grimlock's decision and told him to give him a tail five. Instead of giving his former friend a tail five, Grimlock hits a nearby stone ornament in a fountain and sends it directly at Scowl, leaving the Decepticon unconscious. Before he was fully incapacitated, Scowl heard Grimlock say that just because something was fun to do, it does not make it right. The other Autobots came and arrested Scowl.

Scowl is like Grimlock; he likes to smash everything, he is considered very aggressive, hard-headed, and very dangerous to handle. He thinks smashing things is fun and easy, which makes him a sadistic, destructive, and selfish Dinobot. He also can be provoked with little effort.

In Robot-Mode: Scowl's appearance is that of a muscular and bulky robot, much like Bulkhead with spikes sporting out of his back and shoulders, he has a horn on his face which also has a close resemblance to Predaking 's face. He also carries a huge hammer on his back that he refers to as the "Kaboomer."

In Dino-Mode: Scowl transforms into a big, maroon-coloured Ankylosaurus, still sporting the spikes on his shoulders and back but the horn on his Dino-Mode head is longer, the end of his tail is a huge hammer-club covered with spikes (which is the hammer he usually carries around).

Scowl is a strong Dinobot, matching the strength of Grimlock in equal terms, he's strong to knock 3 autobots and even stands against Grimlock. His tail is a dangerous weapon, one swing can already break walls and bend steel. He shows to even throw a huge truck with his tail alone. Even without Grimlock's help, he can single-handedly bring down an entire arena with his strength.

Ever since Scowl and Grimlock met in Similarly Different, they've become close friends due to their habits of smashing things and both being Dinobots. They were so close that Scowl even considered Grimlock to be his brother, but that all change when the Autobots came in. Feeling betrayed, Scowl felt mad towards Grimlock. When Grimlock tried to bring him on the good side, Scowl rejected Grimlock's offer, stating that there is no fun in that, saying that he is all about smashing and not caring about other's safety. Despite having a grudge on each other, they seemed to still connect somewhat. When Grimlock pretended to see things his way, Scowl seems to welcome Grimlock back, hinting that Scowl really sees Grimlock as his brother, though Grimlock swiftly knocked Scowl out with a massive stone ball and told him that just because something feels fun does not make it right.

Scowl use to be Thunderhoof's bouncer/body-guard/wrecker. Thunderhoof made Scowl in charge of smashing the homes of the territories Thunderhoof claimed. 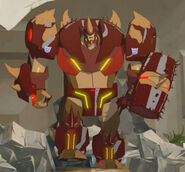 Scowl in his robot mode.

Scowl in his Dino mode.