Start a Wiki
This article is about the Movie Dinobot. For the Kre-O Dinobot, see Scorn (Kre-O).

Scorn is a Dinobot who transforms into a three sailed Spinosaurus.

During transformers, Age of Extinction, Scorn accompanied Grimlock and the other Dinobots on their interstellar ship, the Knights Temenos. After it was hijacked by Lockdown the Dinobots became prisoners on their own ship. Optimus Prime freed the Dinobots, but Optimus still needed to gain their trust if he was to gain their help. Optimus challenged Grimlock to a battle, and Optimus came out the victor, using Grimlock's size to his advantage. Scorn was ridden by Crosshairs during the battle in Hong Kong. Scorn proved to be an amazing warrior, helping stop the invasion of Galvatron and the new transformers. He helped defend the bridge in his Robot Mode to stop Galvatron and Lockdown from getting the Seed. After successfully defending the bridge and winning the battle, Scorn and the other Dinobots were officially given their freedom by Optimus Prime, thanking them for their help. Scorn was last seen running into a forest nearby in his Dino Mode.

Hound riding on Scorn broke through the strengthening of the Decepticons and captured enemy base.

"Scorn has the jaws of a dino and the personality of a tank. He's a rumbling, thundering war hammer on legs. Convert, arm and attack with all the Transformers action you can handle! This Scorn figure is a high-powered fighter whether he's in robot mode or dino mode. With a sword in one hand and a spear in the other, he's a double danger to any enemy in robot mode. When he converts to spinosaurus mode he has a terrible chomping jaw and armored tail! Keep converting him back and forth so he can handle whatever his foes dish out!" 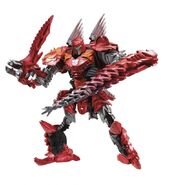 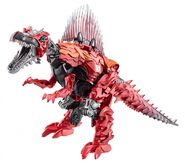