"Each quill does something different, ya galoot!"

Scatterspike is a porcupine-like Decepticon and one member of Clawtrap's team. Her robot mode is the same features as Quillfire, which her quills also have various of effects on bots who are hit by them. She worked with a Mini-Con named Sawtooth.

In Strongarm's Big Score, while trying to find a big haul, Scatterspike and Sawtooth headed to Mount St. Hilary, the first location of the very first Autobot base on Earth, as they set about drilling. The operation was stumbled on by Strongarm and Fixit, though the two scavengers both immediately got the drop on them as they knocked them out temporarily. When the Autobots persisted, Scatterspike ordered Sawtooth to stop Fixit from getting to the drill while she engaged Strongarm in a short scuffle which she managed to hit Strongarm with her quills, only for Strongarm to become magnetized, sticking the two foes together. The fight spilled out into a nearby human settlement, which the foes were separated. Scatterspike's quick get away in robot mode in front of some humans caused Strongarm to explain to the humans about Scatterspike as a construction equipment. When it turned out the drilling was causing the volcano to become unstable, Strongarm finished the fight quickly by cuffing Scatterspike. Sawtooth was later able to free her, and in return when they returned to the other scavengers, where Scatterspike blamed their lack of success on the Mini-Con to Clawtrap, who informed her that the planet has far greater treasures that awaits for them to locate.

In Mighty Big Trouble, she and the other Scavengers tracked a signal to an automated vessel, where they found the Dark Star Saber, only for the Mini-Cons to run off in their sub-orbital craft, and for Starscream to arrive and claim the sword, using it to sweep them all into the sea.

In Mini-Con Madness, while searching to reclaim the Mini-Cons, the scavengers found their quarry had teamed up with Optimus Prime and Team Bee. Using the relics they'd recovered, the scavengers were able to hold their own, until they succeeded in trapping the Autobots in a net, only for Starscream to swoop in and snatch up the Mini-Cons.

In Worthy, thanks to Thermidor, the Autobots escaped their net and, with some help from Tricerashot, defeated the scavengers and they were placed in restraints by Strongarm. 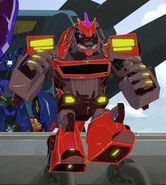 Retrieved from "https://transformers.fandom.com/wiki/Scatterspike?oldid=461107"
Community content is available under CC-BY-SA unless otherwise noted.