Teletraan I: The Transformers Wiki
Register
Don't have an account?
Sign In
Advertisement
in: Animated Autobots
English

View source
The name or term Rodimus refers to more than one character or idea. For a list of other meanings, see Rodimus (disambiguation).

Rodimus Prime is more than just a high ranking Autobot officer, and he doesn't need a badge to prove it! He is extremely popular amongst some of his fellow Autobot brethren, and has mastered several different combat skills, such as servo-to-servo combat. While he has mastered the use of various defensive weaponry, his personal weapon of choice is his uniquely-designed energy bow. Rodimus is a born leader and strives to become the next Magnus. In battle, He looks out for everyone, including the enemy, thus making him a great ally in battle. War is not a game to him, though outside of battle, he is really a nice guy.

Rodimus Prime was in command of a team of Autobots consisting of Ironhide, Hot Shot, Red Alert and Brawn. They were present on an asteroid which contained a Space bridge when they were attacked by Team Chaar. The Decepticons overwhelmed the Autobot forces, forcing Rodimus to call upon the Autobot Elite Guard for help. He was told by Ultra Magnus that their forces were spread too thin and they were on their own. He attempted to defend the space bridge alone but Oil Slick threw a vial of Cosmic Rust on him. TransWarped The group of Autobots tried to beat Charr, but were beat and carried away Rodimus. He survived this though, and was later seen cheering for Optimus Prime and his crew, who brought the newly-captured Megatron, Lugnut and Shockwave to Cybertron. Endgame, Part II

A preview of the figure was displayed at Botcon 2009 as well as other future molds for Transformers Animated figures. His vehicle mode is a large, brawny, high-speed race car that resembles the Generation One Hot Rod. His humanoid mode is quite show accurate and comes with his crossbow weapon which fires two missiles. The figure shows large amounts of articulation. The Japanese variation is heavily chromed and named "Rodimus Prime" or simply "Rodimus" instead. He was sold exclusively at Toys "R" Us stores by Hasbro. 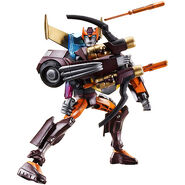 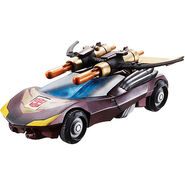 This set comes with clear versions of Rodimus Minor and Takara Lottery Non-Battle Damage Deluxe Optimus Prime. In Japan, These are the first official releases of Optimus and Rodimus. Apart from their 2010 promo run, there is a slight difference in color from the original in the form of clear instead of clear blue.