Teletraan I: The Transformers Wiki
Register
Don't have an account?
Sign In
Advertisement
in: Character stubs missing fiction, Autobots, Combined forms,
and 2 more

Road Caesar is the combined form of the Brainmasters:

making him a rare non-Scramble City style of combiner. Road Caesar is a warrior almost without compare; only Star Saber, Deathsaurus, and Liokaiser could be considered superior combatants. Unlike his predecessors, most of whom suffered from a limited intelligence when combined, Road Caesar is a perfect combination of his component members. Road Caesar shows the responsibility and skill of Blacker, the intelligence of Braver, and the guts of Laster. The child-bearing hips? They're Road Caesar's alone. 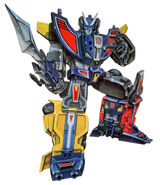