Ripped Up Space is the twenty-sixth episode of Energon. It first aired in the United States on September 04, 2004 on Cartoon Network.

Alpha Q marvels as Unicron returns to life. Kicker and Misha are likewise amazed, but also worried about what will happen now that Unicron has his head back. Scorponok notes that the only remaining task is to get rid of Megatron.

In his control harness, Megatron swears revenge on Alpha Q. Rodimus (linked with Hot Shot) arrives with Landmine and Prowl; but Megatron shields himself before they can fire. Megatron causes Unicron to release massive amounts of unstable, potentially explosive energon.

Shockblast stalks Optimus Prime through Unicron, but when he threatens to usurp Megatron, Mirage and Starscream arrive and hold both of them off. Optimus's entreaties to Starscream to stop Megatron fall on deafly obedient ears.

Alpha Q panics, noting that Megatron's actions will destroy Unicron. Kicker wonders how they're supposed to stop him, which Alpha Q immediately takes as a refusal.

Rodimus and company blast into Megatron's chamber, but he's gone. They keep hunting for him.

Scorponok wants to leave Ironhide behind, saying that he's just "baggage". Prime meets up with Rodimus; Ironhide radios that he's with Scorponok somewhere, and that Scorponok has sensed an energon stockpile. Prime and Rodimus realize Scorponok is a Terrorcon.

Rodimus tells Prime that Megatron wants nothing less than a final showdown with Prime and places himself under Prime's command. Prime has devised a complex attack strategy: Destroy Megatron.

Prime's plan changes: Hot Shot will help Alpha Q and separate Unicron's head from his body, while he and Rodimus finish off Megatron.

In space, Alpha Q's red orb drifts away from Unicron. Hot Shot informs Kicker that Alpha Q is moving, so they'll need the human's guidance. Elsewhere, Alpha Q is releasing energon under Kicker and Misha's direction, but he's a bit confused as to why. Kicker tells him to go slowly, so Megatron won't notice.

Megatron, wired up to another control node, is furious at this attempt at resistance. He plans to destroy Unicron and then everyone else. Scorponok arrives and challenges him. Alpha Q stops, as he senses Scorponok and Megatron engaging. Despite backup from Ironhide, Megatron slices off Scorponok's tail, rips off his arm, and stabs him through the chest. Alpha Q refuses to leave his friend behind and heads back toward Unicron, despite Kicker's protests.

Megatron rejoins with his control harness. Alpha Q speaks, asking why Megatron is doing this and telling him that Unicron will destroy him as well if he doesn't stop. Megatron expels Scorponok and Ironhide and activates his energon. The energon starts to react, spreading panic among all the forces.

Megatron merely chuckles as a giant energy rift forms near Unicron, sucking in Hot Shot's team. Ironhide challenges him, but Optimus and Rodimus arrive before Megatron can do anything. Hot Shot and Prowl combine to go after Landmine; Demolishor and Snowcat are also sucked in.

Alpha Q retreats in the face of the rift, getting too close to it, to the point that it begins to pull him in. Having started this, Alpha Q vows to see it through. Kicker loses contact with him.

Prime and Megatron prepare to have a final showdown. Shockblast briefly interferes, but a chunk of debris clobbers him and sends him spiralling off into the rift. Megatron leads Starscream and Mirage away into the rift. The Autobots retreat, as Unicron is about to explode. Unicron falls into the rift.

Prime sends Ironhide to report back to Cybertron and leads the rest of the team in pursuit of Megatron through the rift. Ironhide contacts Kicker, who yells and screams a lot till Ironhide tells him he's just following orders. Arcee arrives with a squad of Omnicons as the Miranda II prepares to follow Optimus through the rift.

—Alpha Q summarizes the entire episode in a nutshell.

"I'll use the energon I've collected and use it to destroy all who dare challenge my supremacy!"

Rodimus: "Optimus. I hate to disagree."
Optimus: "Uh?"
Rodimus: "You can't let Ironhide get ahead of us. Megatron will annihilate him in a nanosecond. Megatron wants a showdown with you, his arch-rival, and he won't let anything stand in his way."
Optimus: "Yes."
Hot Shot: "Let's do this!"
Landmine: "Yeah!"
Rodimus: "Until this mission is completed, I put myself totally under your command, Optimus. Just let us know what you need, sir."
Optimus: "Thank you, Rodimus."
Prowl: "So. I guess that means we kinda got ourselves a new boss, Landmine."
Landmine: "Kinda looks like it, doesn't it, Prowl."
Rodimus: "Okay. Now that we all agree that you're running the show, Optimus, what's our first plan of attack?"
Optimus: "Ha hah. Very simple. We destroy Megatron. But remember—he's mine."
Rodimus: "Yes, sir."
Optimus: "Okay, let's get moving, men. We've got a job to do. Roll out!"
Rodimus: "Hm. Just lead the way. Disengage!"
[Hot Shot separates from Rodimus]
Hot Shot: "Hot Shot reporting in, sir."
Optimus: "We're counting on you, soldier."
Rodimus: "Remember to stay close, in case we need to link up again, Hot Shot."
Hot Shot: "Don't you worry, Rodimus. We'll do whatever it takes to win this fight."
Rodimus: "Right. Then let's listen up to Optimus."
Optimus: "Change in plans, men. Hot Shot, take Prowl and Landmine and help Alpha Q. Rodimus and I will take care of Megatron. Your mission is to separate Unicron's head from its body."
Hot Shot: "Yes, sir!"
Optimus: "This is the most dangerous mission we've ever been on. But with the power of energon, we will succeed."

—The Autobots put their faith in a true master tactician.

"There's a hole in the universe!"

"Optimus. What's our next plan of action, sir?"
"We save the universe."
"That's a pretty tall order, sir."

"So what are you doing back here?"
"Well, because...Optimus ordered me—"
"Where did everybody else go?"
"They all followed Optimus somewhere."
"Why didn't you go?! Why are you here?! Where's Optimus?!"
"I was ordered to report to Cybertron!"
"Why didn't you say that before?!" 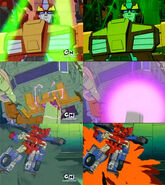 The colors, Duke, the colors!
Add a photo to this gallery

Retrieved from "https://transformers.fandom.com/wiki/Ripped_Up_Space?oldid=430505"
Community content is available under CC-BY-SA unless otherwise noted.